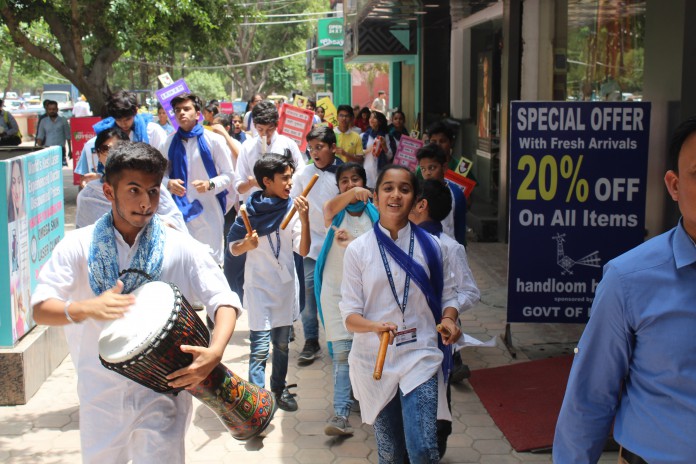 Gurugram: Students of Ridge Valley School organized a two day Voter’s awareness campaign. In order to spread word about the importance of voting and the right to vote, various activities including Nukkad Natak, placard marches, and sloganeering were held.

Students marched towards Galleria market, Gurugram with the placards carrying motivational messages written on them. Later in the day, Nukkad Natak was presented wherein students urged people to duly exercise their right to vote. Each vote makes lot of difference and kids beautifully tried to make people realize this through the street play.

“The Voter Awareness Campaign is completely driven by our students. Although, they are not eligible to vote but they can be great influencers. Children are so much aware these days and they look forward to a meaningful society. They can certainly influence adults in their surroundings to go out and cast their vote. In our country, it is ironic to know that people who miss out on their voting exercise are educated ones. This is the reason that we took up this drive so that students can go in front of such audience, interact with them and encourage them to not miss on such important responsibility” said Aarchana M Sagar, Principal, Ridge Valley School

The election for Lok Sabha, the lower house of the Parliament is being held in seven phases this year. Phase 6 & 7 of the elections are yet to take place, the voting in Gurugram is scheduled for the 6th phase. “We are happy to spread awareness amongst people. It is important for each citizen to use their right of vote. The power lies in the hands of people to select the right Government to drive the nation. That is why it is important to aware people to vote in the right direction and select the appropriate and deserving candidate for the betterment of the country,” said a student of Ridge Valley School.

The election date for Gurugram constituency is 12th of May and city is all geared up to choose leaders for a better tomorrow. “We want people to cast their vote rightly as this is our voice and opinion. We would want that people ensure 100% turn out in their constituency. It is the need of an hour to spread awareness about voting in order to select the right representative for our nation” said a student of the School who played a character in the street play.”

India is the largest democracy in the world and as a law abiding citizen of the country, it is utmost important that we exercise our suffrage. If the country is in the right hands, its undaunted growth will be ensured