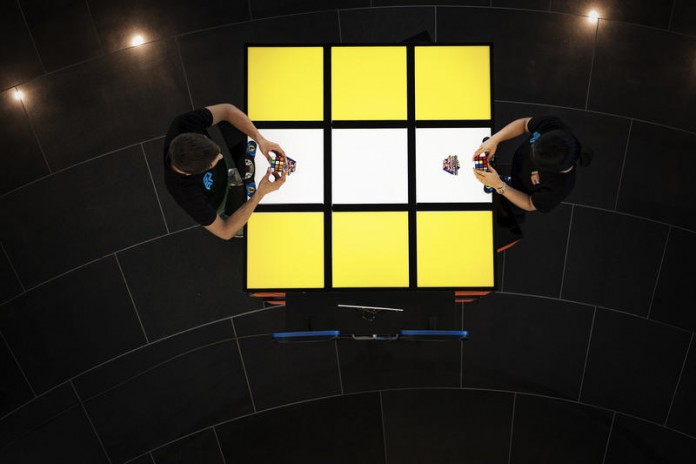 Participants from around the world will compete for a share of the $30,000 prize pool

New Delhi, 23 March 2018:The inaugural Red Bull Rubik’s Cube World Championship will be held in Boston, USA on 22 September 2018 in an event designed to challenge the most accomplished cube solvers in one of the most exhilarating emerging sports. Qualifying events will be held in more than fifteen countries, from Brazil to Japan, UK to India, as well as online via a wild card system, and the best players flown to Boston in 2018 for the championship finals. Anyone from around the world is invited to enter the championship by registering online at www.redbullmindgamers.com/rubiksand compete to be crowned the fastest Rubik’s cube solver in each game-mode and win a share of $30,000 prize purse.

Red Bull Rubik’s Cube world championship in India will kick off its first qualifier this weekend in Kolkata.

Winners of each city qualifier will compete in the National Finals. Cubelelo.com are the technical partners for the Qualifying events in India.

The 2018 Red Bull Rubik’s Cube World Championship introducesthree new game modes – ‘Speed Cubing’, a straight best of five head to head competition, ‘Fastest Hand’ in which competitors must solve the Cube one-handed, and ‘Re-Scramble’, a straight head-to-head race to solve a single scramble. Designed in conjunction with the speed-cubing community, participants will face one another in a series of one vsone knockout rounds, to find out who is the fastest Cube solver in a never-before-seen competition.

The competition and the three main game modes are open to persons of any gender, and, in addition, there will be a women-only mode. Female cubers can choose if they want to participate in the women-only track, in the mixed track or both. India will send participants (1 in each category) for the world finals in 4 categories: ‘Speedcubing mixed’, ‘Speedcubing women’, ‘Fastest Hand’ and ‘Re-Scramble’.

The Rubik’s Cube was invented by the Hungarian Professor Ernő Rubik in 1974 and has since become the best-selling puzzle in the world. While there are more than 43 quintillion ways to scramble The Rubik’s Cube, every ‘scramble’ can be solved in 20 moves or fewer. While it took Professor Rubik a month to solve his first cube, since the 1970s puzzle fans around the world have competed to solve the puzzle the fastest. The first world championship was held in 1982 with a winning solve time of 22.95 seconds. Today the world record is 4.59 seconds and is held by SeungBeom Cho, a South Korean speedcuber.

“In recent years speed-cubing has become increasingly popular, with numerous tournaments held around the world. “The Cube celebrates intelligence and playfulness and speedcubing brings strong resolve and a global community of enthusiasts to the party,” said Professor Rubik.

Qualifying events are taking place in Austria, Australia, Brazil, China, Denmark, Germany, Hungary, India, Japan, Netherlands, Russia, Spain, Switzerland, UK, Ukraine and the USA.Registration for the regional qualifier events started in January 2018, online at www.redbullmindgamers.com/rubiks. Anyone above the age of 16 can participate.

The Red Bull Rubik’s Cube World Championship is part of Red Bull Mind Gamers, which hosts global competitive tournaments to give the greatest Mind Gamers the opportunity to show their skills worldwide in a range of problem-solving scenarios, across a variety of disciplines, everything from Escape Rooms to Rubik’s Cube Speed Solving.

Editorial content such as videos, pictures and texts available on redbullcontentpool.com

Red Bull Mind Gamers is a global hub for mental challenges that stretch the mind. At www.redbullmindgamers.com, you will find a range of thoughtprovoking games, quizzes and challenges, as well as articles and stories about the mind universe.

In addition, when you are ready to test your skills against others, Red Bull Mind Gamers runs global competitive tournaments to give the greatest Mind Gamers the opportunity to show their skills worldwide. At these events, both teams and individuals can prove their mental power in a range of problem-solving scenarios, across a variety of disciplines, everything from Escape Rooms to Rubik’s Cube Speed Solving. Red Bull Mind Gamers: Think Brilliant.