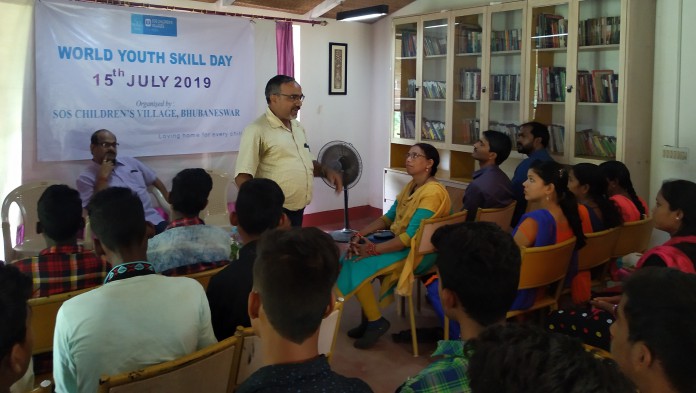 SOS India organised activities in its projects all over the country, building on the importance of enhancing and learning new skills for the lifetime. At SOS Children’s Villages the day witnessed activities like taking youth for nearby factory visits, street plays and career awareness programmes on skilling, discourse on improvising and up scaling aptitudes by industry experts, and discussions around importance of soft skills towards preparing for an interview, how to develop networking skills and keys to emerge as a trustworthy employee.

On the occasion, Mr. Sumanta Kar, Deputy National Director Integrated Child Care, SOS Children’s Villages of India sought support from the corporate world towards appropriately skilling the youth. He said,“We need to work collaboratively given that India is home to over 20 million parentless and abandoned children. And, this figure is projected to increase to 24 million by 2021. This means, such children, if left unattended, are unlikely to reach their actual potential, and can be a burden on the country instead of contributing to its progress. Apart from support from the government, we need corporate partners to provide industry training or offer some capsule courses to the youth as a part of corporate social responsibility”, Notably, the organisation has impacted lives of 71,000 ones parentless and abandoned children since its inception.

With 66% of the populace being younger than 35, India houses the world’s biggest youth populace. However, at the same time, it’s lamenting to note that, more than 31 million of youth below 35 in India are jobless. Purposes for joblessness include lack of family and support system, proper education, inadequate skill development, market restrictions, etc.

“We at SOS Children’s Villages of Indiastrive to lead our children to become capable and independent youth, by providing them necessary love, care, education and skills whether they are under our SFC or FS programme. We take pride in announcing that nearly all our youth are settled today”, said Kar. Last month only, SOS India announced the placement of 86% of its youth, while releasing a study titled – ‘Tracking footprints of the settled youth’, and, encouraged the youth under its care.

Role SOS Children’s Villages of India in skilling the youth along with case studies:

SOS India has been working for the all encompassing advancement of youth for more than 50 years by creating basic aptitudes in youngsters since day one of their entry at a home in an SOS India Family. In 32 Children’s Villages crosswise over 22 states in India, every individual is given legitimate training and later imparted with morals and aptitudes required to have a manageable future.

SOS India works around its two lead programmes- SOS Family Like Care (SFC) and Family Strengthening (FS). While SFC is a curative model that gives a family like condition to parentless children to experience a happy childhood, FS is a network programme to keep youngsters from losing parental care. While young females keep on remaining in the Family Home, young men at the age of 12-14 years are moved into an adolescent house called the Youth Home.

Among the numerous capable youth, one is Muruga. Brought home to SOS Family at the age of five along with his older sibling, Murugawas brought to SOS Children’s Village Bangalore in 1992. SOS India distinguished his potential and helped him secure a full grant to seek education for MBBS. He is currently doing his medicinal practice at JSS Hospital, Mysore. Close by his training, Muruga runs a little center where he gives free medicinal consideration to youngsters.

Like Muruga, another adolescent who made SOS India proud is Hena Pore. Hena was just few days old when she came to SOS Children’s Village Jaipur. Lively and brilliant, she performed surprisingly well in scholastics. Hena felt free to join the National Cadet Corps (NCC) Air Wings during school. She was granted as the best cadet in the National Air Show in 2006, held at Bengaluru. Around the same time, she additionally turned into the First Woman Cadet from Rajasthan to fly a smaller scale light air make on the event of the Republic Day Parade. And, she was accepted into the Indian Air Force as a Commissioned Officer.