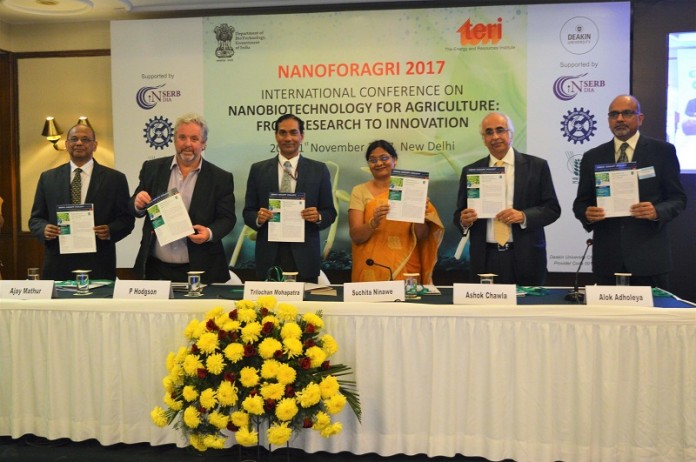 TERI Deakin Nanobiotechnology Centre, in partnership with Department of Biotechnology (DBT) Government of India, organised a two-day international conference to address the challenges of nanobiotechnology in agriculture sector

New Delhi, November 21, 2017: Excessive use of chemical fertilisers creates nutrient imbalance in soil and results in reduced productivity and environmental problems. Therefore, it is important to develop innovative and sustainable solutions to meet soaring demands using limited resources. Today, an engaging dialogue was organised by TERI Deakin Nanobiotechnology Centre on “Nanobiotechnology for Agriculture: From Research to Innovation” in New Delhi, where the ‘Zero Draft Policy for Regulation of Nanoproducts in Agriculture’ was unveiled.

Mr Ashok Chawla, chairman, TERI, said, “Nanobiotechnology is the key to optimum use of inputs in Indian agriculture.”

Speaking about the conference and release of the Zero Draft Policy, Dr Ajay Mathur, Director General, TERI, said, “The way we use fertilizers has led to large scale harm to health and soil.”

Talking about learnings from the conference, he said, “We look to ways in which we can take innovations from the lab to the fields.”

According to the United Nations (UN), India accounts for 17.84% of the world’s population and by 2025, India’s population is likely to exceed 1.5 billion, simultaneously raising the demand for food grains to over 300 million tonnes as against the current production (2015-2016) of 252 million tonnes. The current fertiliser consumption of nitrogen, phosphorous and potassium has been registered at 23.59 million tonnes (2013-2014). However, the removal of nutrients from soil is far higher than the additions, thereby creating a net negative balance of about 10 million tonnes from soil every year and causing a serious threat to soil health. The conference provided an interactive platform to showcase technology snapshots, discussions and deliberations in focused thematic sessions to understand the innovation space and scope for nanobiotechnology interventions to address pressing issues in agriculture.

Highlighting the expected outcomes of the conference, Dr Alok Adholeya, Director, TERI Deakin Nanobiotechnology Centre, said, “Resource-use efficiency is a prime target not only to achieve higher crop productivity but also to safeguard human health due to the leachates going into the environment and causing many health hazards.”
On the occasion, Professor Peter Hodgson, Deputy Vice-Chancellor (Research), Deakin University, said,”The idea is to offer a platform to encourage research in relevant areas of agriculture and health for socio-economic development of both the countries with intervention of nanobiotechnology, which is already in progress at the TERI-Deakin Nanobiotechnology Centre. Here, we are talking about the community issues, agriculture issues and health issues, for a healthy society. We need to make an impact in research so that it remains valid for next 20 years and beyond. Our focus will be to do projects which will yield output in the coming years.” 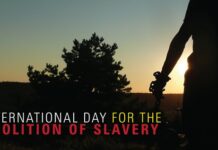 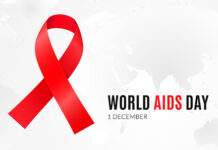 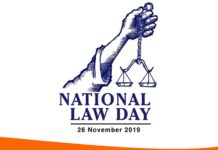