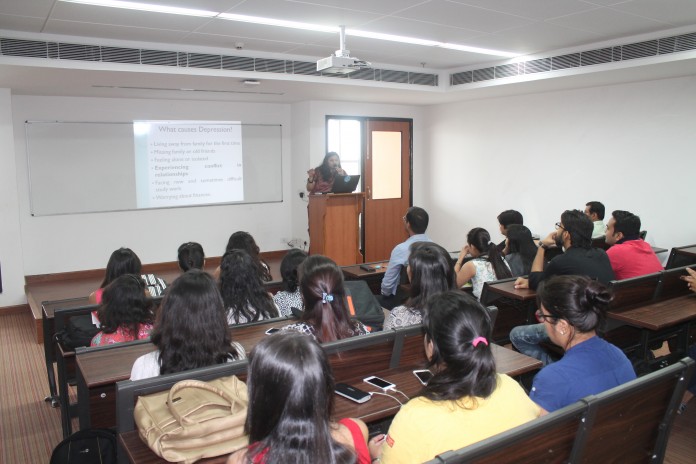 On the occasion of World Health Day, The NorthCap University organized a talk on ‘depression’ in the university premises. It was conducted by Dr. Shweta Sharma, Psychologist, Columbia Asia Hospital. The aim was to define depression, risk factors, treatment options, self help, coping skills and how to help someone with depression.

Dr. Shweta Sharma, Psychologist, Columbia Asia Hospital said, “The most common problems in the present scenario are related to career options and relationship issues. It is very important to help yourself and then help others. Nowadays children are hesitant to discuss things with professionals so one of the most easy ways to tackle any depression issue is being a friend for a friend.”

The group therapy workshop focused on examining one’s beliefs towards themselves, the world and future and determining the change which was needed. Examples of irrational and self defeating feelings and ideas were also discussed.

An interactive session was held towards the end in which students came forward to share their problems. It involved audio visuals, stories, case studies, real life experiences, exercises and thought experiences.

The NorthCap University regularly organizes such workshops and has an in house psychologist Dr. Nikita Kapoor. Depression is a leading cause of ill health and disability worldwide, and effects people of all ages, from all walk walks of life, in every country. According to the latest estimates from WHO, more than 300 million people are now living with depression, an increase of more than 18 per cent between 2005 and 2015. Lack of support for people with mental disorders, coupled with a fear of stigma, prevent many from accessing the treatment they need to live healthy, productive lives.