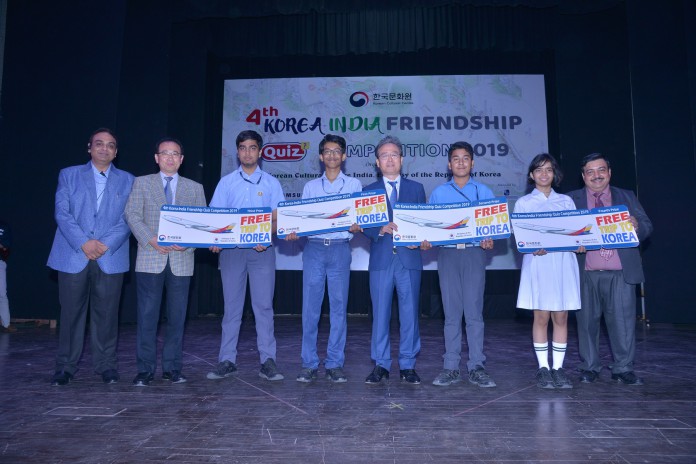 24th April 2019: Korean Culture Center India organized 4th Korea-India Friendship quiz contest’ – one of the biggest quiz contest on international theme of Delhi NCR with the participation of 23, 433 students from 60 Schools. The initiative was taken by KCCI in 2016 with the aim of strengthening Korea – India relationship through spreading awareness and knowledge among Indian youth. Top 4 winners will go to Korea for six days and five nights trip. 20 other students received a cash prize of Rs. 51,000 and trophies.

The topics of the quiz was on various aspects of history and culture and Korea, as well as growing bilateral relationship between India and Korea. 24 selected contestants among 600 students in the second round got selected to compete at the final, only 8 of which made their way into the grand finale.

The event was graced by the presence of His Excellency, Shin Bong-kil Ambassador of Republic of Korea to India, He was surprised to see the enthusiasm of students and the extent of preparation which students did. The depth of knowledge gained by Indian students about Korea was immense. He acknowledged this event as one of the best event organized by KCCI. “I am confident that students will be torch-bearers of Korea-India friendship in days to come”, he said.

Kim Kum-pyoung, director Korean Culture Center India, said that India and Korea share a strong bond in the area of culture, heritage, and business. He also mentioned that strengthening the youth base between both the nations will give this bilateral relation a much stronger base.

First prize winner Akshat Singh from Birla Vidya Niketan said that he devoted his one month time for preparing for this quiz competition, and kept his focus aside from other subjects. This devotion has come to him with the reward and he is excited to explore the nation not through books only but in reality too.

The annual quiz competition inaugurated in 2016 had around 12,505 student’s participation in the first year. This year the huge participation has not only raised the bar but also made a tough room for winners. Students were well versed on subjects like K-pop, K-drama, and Korean delicious food while aware of close ties between India and Korea over culture and diplomatic relationship.