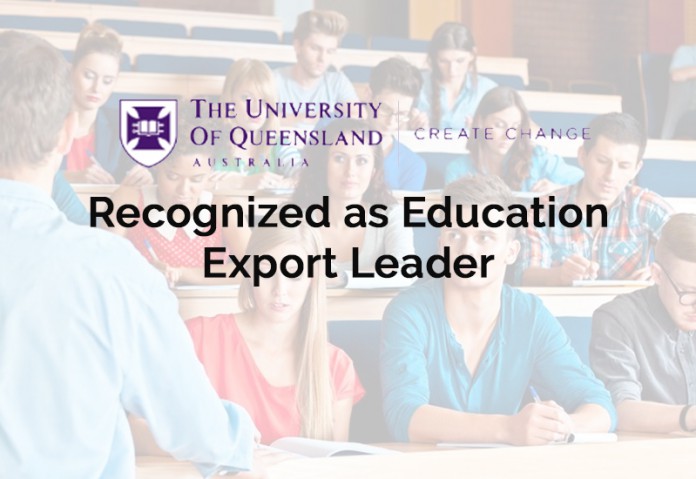 16th October, 2018– The University of Queensland has been recognised for its strong contribution to Queensland’s export sector, winning the Education and Training category of Premier of Queensland’s Export Awards 2018.

The award is testament to UQ’s work to attract and retain high-quality international students and researchers from across the globe and deliver the exemplary learning experiences.

Provost and Senior Vice-President Professor Aiden Byrne, who accepted the award on behalf of UQ, said the award recognised the contribution exporting businesses made to the state’s economy through job creation and increased prosperity in the community.

“The Export Awards celebrate the success of Queensland businesses across the State who are making their mark on the global stage, and UQ is proud to be among them,” he said.

“The companies named as finalists prove the depth and breadth of talent we have in this State.

“The award is the result of dedication and hard work from our outstanding people, who are recognised globally for the life-changing work they do,” Professor Byrne said.

UQ celebrates its win alongside Tritium, a company founded by three UQ alumni, who won the Manufacturing category and took out top honours as the Premier of Queensland’s Exporter of the Year.

Tritium’s journey began in 1999 and grew out of solar car racing at the University of Queensland, spearheaded by three former students, David Finn, Paul Sernia and James Kennedy.

Tritium, an electric vehicle fast-charger manufacturing business, was founded in 2001 and went global in 2017.

“We now have more than 200 staff and counting, and are expanding our Veefil-PK operations in Brisbane, as well as having offices in the US and Europe,” he said.

“We continue to design and manufacture all of our chargers in Brisbane and we’re proud to call Queensland home.”

Professor Byrne said the Tritium trio exemplified the fact that UQ produced graduates who had the courage to leap into the unknown, to take a spark of an idea and make it something big.

“Our graduates pioneer change across the globe and provide opportunities right here in Brisbane,” he said.

UQ and Tritium progress as finalists in the 56th Australian Export Awards national program in Canberra on 27 November 2018.