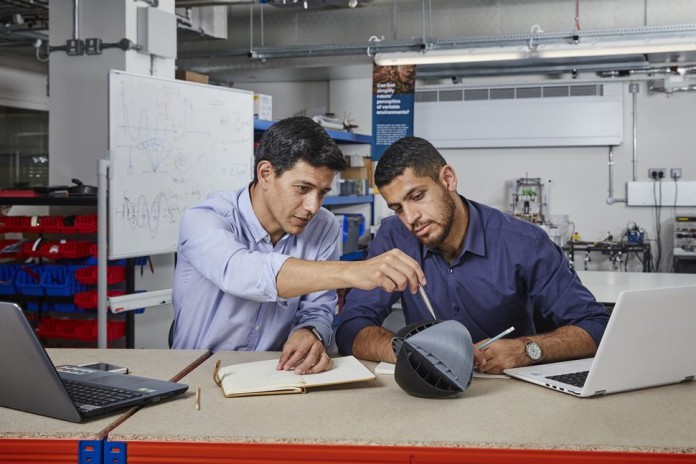 New Delhi, 15 Nov 2018: From climate change, to poverty, global issues increasingly demand collaborative, cross-cultural responses. Originating from Chile and Kenya respectively, Nicolas Orellana and Yaseen Noorani represent a new era of talent that are working together to develop technologies that are capable of tackling our shared problems. Studying

International Innovation MSc together at Lancaster University, they set out to harness urban wind with an inventive new type of turbine. But what’s the problem with wind?

The taller we build our cities, the windier they become. As we hunt for renewable sources of power generation this powerful and plentiful resource is left untapped largely because traditional wind turbines only capture wind travelling in one direction. This means they are very inefficient in cities where the wind is unpredictable and multi-directional.

When wind blows through cities it becomes trapped between buildings, is dragged down to the street and is pushed up into the sky. This catapults wind into chaos, which renders conventional turbines unusable. Using a simple geometric shape, O-Wind Turbine is designed to utilise this powerful untapped resource, generating energy even on the windiest of days.

Sir James Dyson said: “Design something that solves a problem is an intentionally broad brief. It invites talented, young inventors to do more than just identify real problems. It empowers them to use their ingenuity to develop inventive solutions. O-Wind Turbine does exactly that. It takes the enormous challenge of producing renewable energy and using geometry it can harness energy in places where we’ve scarcely been looking – cities. It’s an ingenious concept.”

Nicolas Orellana first became interested in the challenge of multidirectional wind after studying NASA’s Mars Tumbleweed Rover. Six feet in diameter, this inflatable ball was designed to autonomously bounce and roll like tumbleweed, across Mars’ surface to measure atmospheric conditions and geographical location. Like conventional wind turbines, it was powered by unidirectional wind blows which severely impaired the rover’s mobility when faced with obstructions, often throwing it off course and resulting, ultimately, in the failure of the project.

By exploring the limitations of the Tumbleweed, Nicolas’s three-dimensional wind turbine technology was born. Nicolas and his fellow student Yaseen Noorani soon identified how cities could use this technology to harness energy to produce electricity.

How does O-Wind Turbine work?

O-Wind Turbine is a 25cm sphere with geometric vents; it sits on a fixed axis and spins when wind hits it from any direction. When wind energy turns the device, gears drive a generator which converts the power of the wind into electricity. This can either be used as a direct source of power, or it can be fed into the electricity grid. Nicolas and Yaseen aim for O-Wind Turbine to be installed to large structures such as the side of a building, or balcony, where wind speeds are at their highest. Click here to see the device in action.

Nicolas Orellana said: “We hope that O-Wind Turbine will improve the usability and affordability of turbines for people across the world. Cities are windy places but we are currently not harnessing this resource. Our belief is that making it easier to generate green energy, people will be encouraged to play a bigger own role in conserving our planet. Winning the international James Dyson Award has validated our concept. The attention we’ve received so far has been humbling and given us the confidence to see the development of this concept as a future career. Already we are in discussions with investors and we hope to secure a deal in the coming months.”