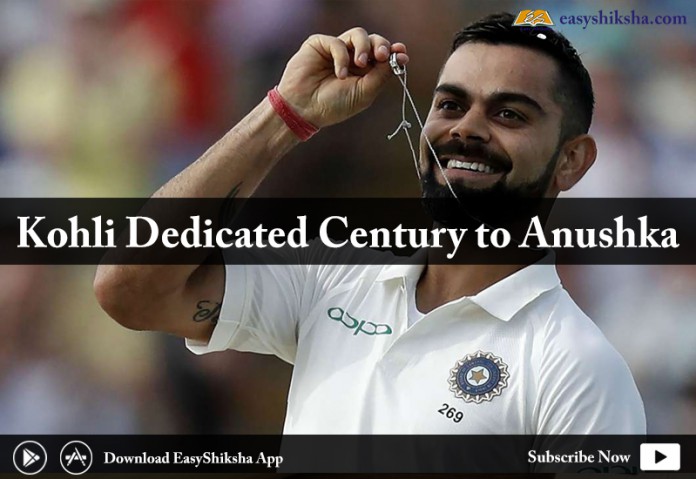 Indian skipper Virat Kohli dedicated his well-fought historic Test century on the second evening of the first Test against England at Edgbaston to wife Anushka Sharma. The century, en route to his epic knock of 149 runs off 225 deliveries, was his first on English soil in Test cricket. Overall, it was his 22nd Test ton and fourth against England, with the rest three coming at home.

After reaching his century, Kohli reached under his shirt and kissed the ring he had attached to a chain. The Indian skipper then gave a flying kiss to his wife Anushka Sharma, who was watching from the stands in Birmingham. The century, en route to his epic knock of 149 runs off 225 deliveries, was his first on English soil.

Helped by two dropped catches at 21 runs and 51 runs, Kohli batted on and made England pay for their mistakes. He let out a huge roar in celebration after belting the ball off Ben Stokes for a boundary to bring up his century. In celebration, he slipped off his wedding ring from around his neck and kissed it in a defiant message to his critics who had questioned his ability to come good after a dismal tour of England in 2014 where he averaged just 13.40.

“At one stage, we were staring down the barrel and Virat’s innings has narrowed down the gap between the two teams immensely,” said India’s assistant coach Sanjay Bangar said at a press conference. “The game is very finely poised now.”