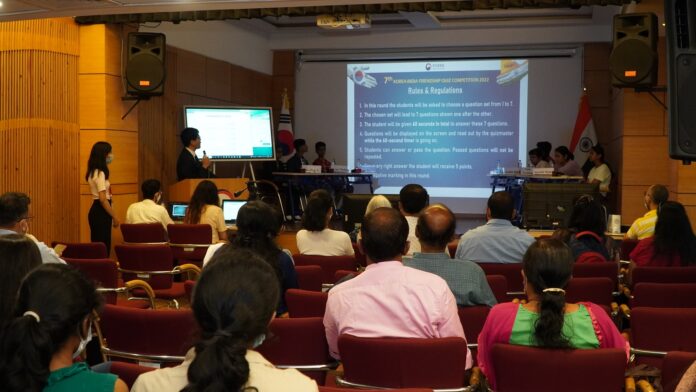 The competition was kicked off on 1st March 2022 and was concluded on 12th May 2022 at Korean Cultural Centre India, New Delhi. After an individual rapid fire quiz and group speed rounds. It was concluded with Taekwondo demonstration and a K-pop performance by a girl group who won the 2021 K-pop contest India Delhi round winners, which made the event more splendid.

This year 6,810 schools participated from Pan India, which is a huge leap from 2,608 school participation last year in 2021. After three months and two highly competitive rounds, 07 students from all over India competed in the finale for the title of National Champions in Delhi. The flight tickets and accommodations of all 07 finalists and their individual guardians for the final round of the event were supported by KCCI.

This was followed by a Korean cultural experience tour which had all finalists and audience members get to experience the depths of the Korean culture with a demonstration of samulnori, a traditional percussion instrument, trying out Hanbok and Playing Korean traditional games. Korean Cultural Centre India had also organised the Korean cuisines reception with the buffet of all vegetarian Korean delicacies like Japchae, Kimbap, and Tteokbeokki, to name few, for everyone to relish.