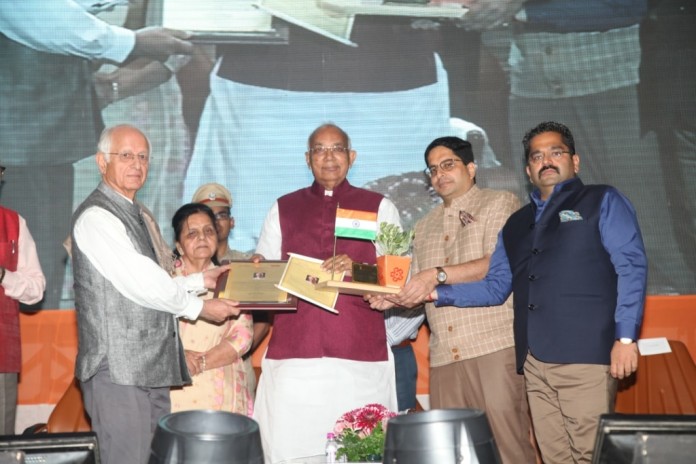 It is noteworthy that Prof. Kaptan Singh Solanki gave away the honours at the first Manav Rachna Excellence Awards. Reminiscing the first edition, Prof. Kaptan Singh Solanki informed the audience that the awards are a true reflection of nurturing human capital. He stressed upon the importance of the four key elements of Spirituality, Self-Control, Respect and Compassion in the success of individuals.

In his welcome address, Dr. Sanjay Srivastava shared: “The assessment process is one of the most robust of any award. A rigorous opinion poll amongst our elite selection committee led by Padma Shri Dr. Pritam Singh; Sh. S Y Siddiqui; Sh. S K Roongta; Mr. Kishore Jayaraman and several other corporate and academic leaders is conducted to determine the role models within various domains”.

The eight stalwarts who were honoured on this prestigious platform are revered figures:

(received by Mr. A Vishwanathan, VP-Corporate)

Smt. Satya Bhalla said: “At Manav Rachna, excellence is a continuous journey. Our institutions have been working ceaselessly to actualize the dream of our Founder Visionary Dr. O P Bhalla. It was his dream to give to the nation, well-rounded citizens who are balanced in their approach, yet revolutionary in their ideas”.

Dr. Prashant Bhalla added: In a journey of 21 years, our Institutions have given to the nation many corporate leaders and sports achievers. We take pride in sharing that Shreyasi Singh who has won Gold in Women’s Double Trap shooting at CWG 2018 and Ankur Mittal who had won Bronze in the Men’s Double Trap Shooting at CWG 2018, are both Manav Rachna students. Our students have been raising the bar of excellence, year after year. We are very confident, that the coming editions of MREA will see our very own students/alumni being bestowed with the prestigious honours.”