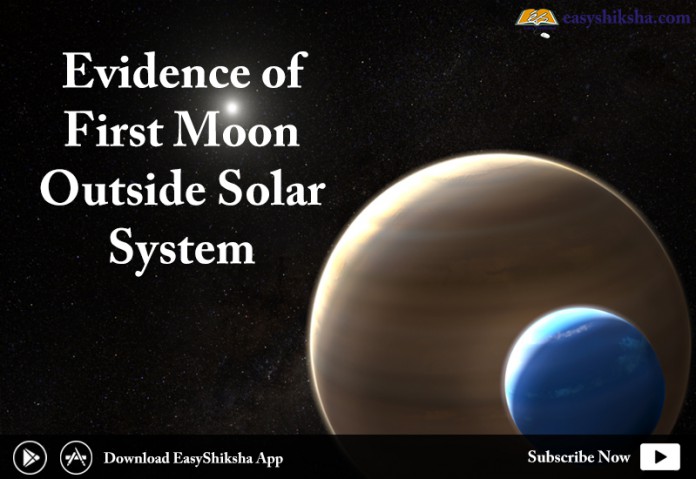 Using NASA’s Hubble and Kepler space telescopes, astronomers have uncovered tantalizing evidence of what could be the first discovery of a moon orbiting a planet outside our solar system.

This moon candidate, which is 8,000 light-years from Earth in the Cygnus constellation, orbits a gas-giant planet that, in turn, orbits a star called Kepler-1625. Researchers caution that the moon hypothesis is tentative and must be confirmed by follow-up Hubble observations.

“This would be the first case of detecting a moon outside our solar system,” said Kipping, an assistant professor of astronomy at Columbia. “If confirmed by follow-up Hubble observations, the finding could provide vital clues about the development of planetary systems and may cause experts to revisit theories of how moons form around planets.”

In looking for exomoons, the researchers analyzed data from 284 Kepler-discovered planets that were in comparatively wide orbits, with periods greater than 30 days, around their host star. The observations measured the momentary dimming of starlight as a planet passed in front of its star, called a transit. The researchers found one instance, in Kepler 1625b, that had intriguing anomalies.

“An extraterrestrial civilization watching the Earth and Moon transit the Sun would note similar anomalies in the timing of Earth’s transit,” Kipping said.

The moon is estimated to be only 1.5 percent the mass of its companion planet, which itself estimated to be several times the mass of Jupiter. This value is close to the mass-ratio between the Earth and its moon. But in the case of the Earth-Moon system and the Pluto-Charon system, the largest of the five known natural satellites of the dwarf planet Pluto, an early collision with a larger body is hypothesized to have blasted off material that later coalesced into a moon. Kepler 1625b and its satellite, however, are gaseous, not rocky, and, therefore, such a collision may not lead to the condensation of a satellite.