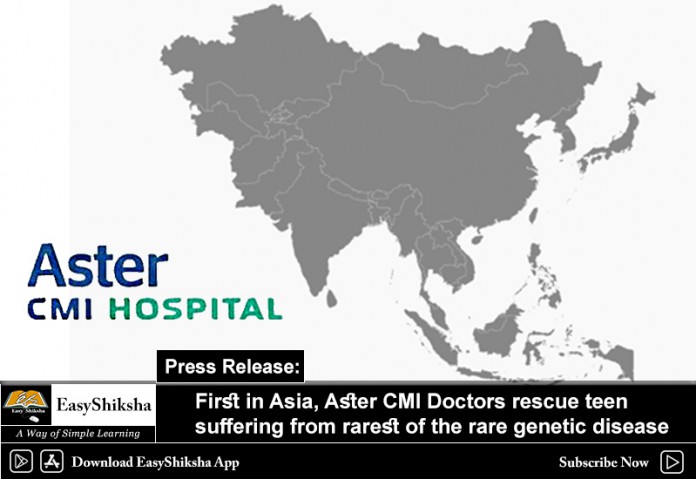 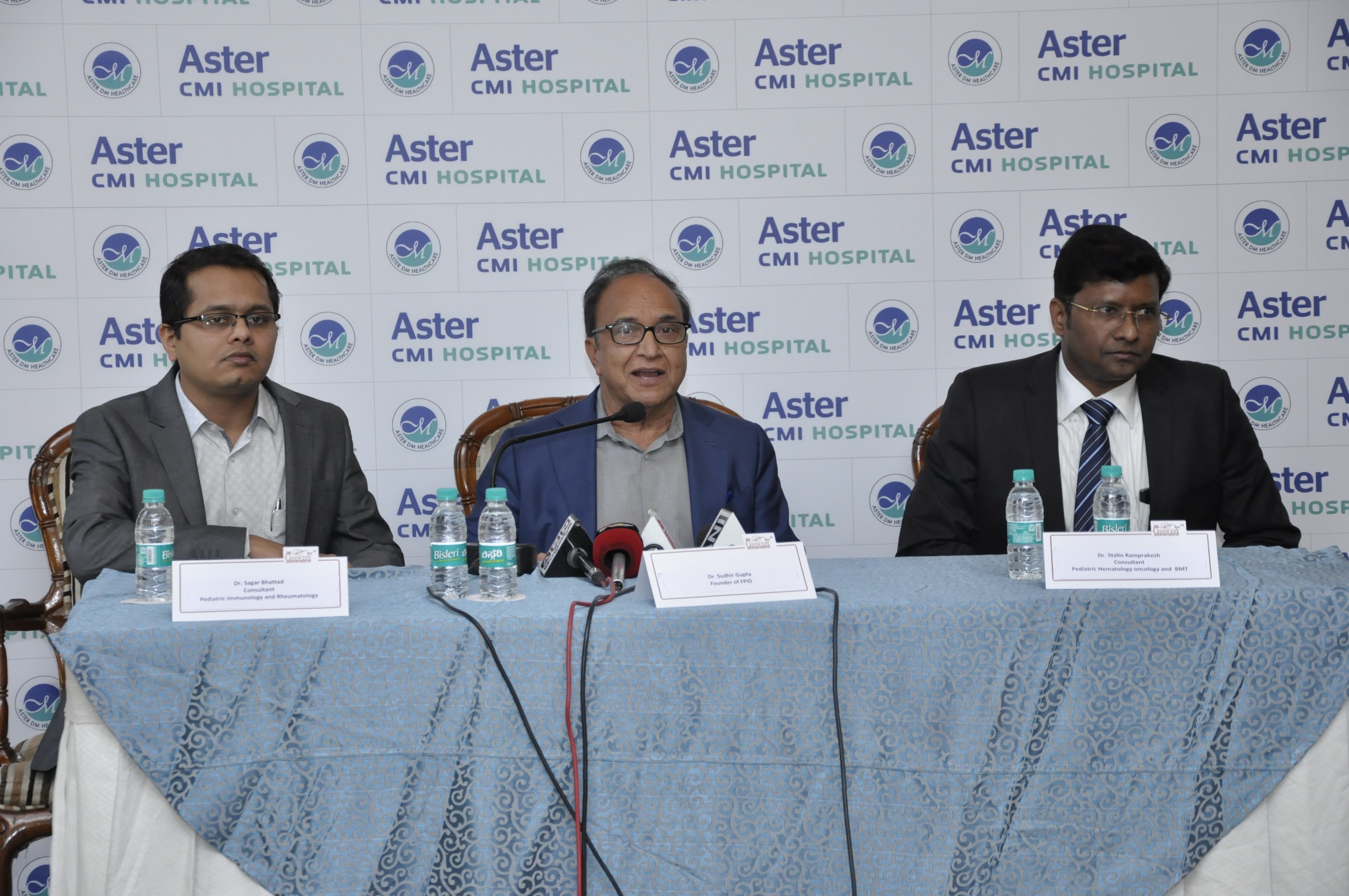 Bangalore, March 13th, 2019 – Ciara (name changed),a 13-year-old-girl from Mauritius, suffering from rarest of the rare Complement Deficiency genetic disease, C1q deficiency since the age of 2, became the first teen in Asia suffering from this complex condition to receive a bone marrow transplant. Thanks to the team of efficient doctors at Aster CMI Hospital, Bangalore for granting her a new lease of life. Ciara was suffering from repeated skin rashes and kidney ailments for over a decade and also developed difficulty in walking and stiffening of lower limbs. Until the transplant, Ciara was on multiple immune-suppressants to control the autoimmune condition – Systemic lupus erythematosus and was being treated with over 10 different medications for her severe skin disease, kidney disease and pulmonary hypertension.

Not just she was wheelchair bound, but also had very high risk of permanent renal failure till the Pediatric Immunology department at Aster CMI Hospital diagnosed her to have a very rare genetic disease – complement C1q deficiency as confirmed by the genetic studies conducted at the hospital. She was advised to undergo a bone marrow transplant and her father was found to be a full HLA match. He donated his bone marrow to Ciara and the teen has been cured to lead a normal life now. Currently, she is under medications and would require close follow-up for the next six months. Efforts taken by the hospital to help the family raise a large sum worth Rs. 26.5 lakhs through a crowd funding platform played a vital role in making the successful transplant possible. Currently, less than 10 such cases have been successfully transplanted in the world so far. The first one was conducted in UK in 2014. The transplant was carried out by the joint efforts of Dr Sagar Bhattad, Consultant, Pediatric Immunology and Rheumatology, Dr Stalin Ramprakash and Dr CP Raghuram, Consultants, Pediatric Hematology and BMT, Aster CMI Hospital, Bangalore.

While speaking about the rarity and complexity of such cases during the event, Dr Sagar Bhattad, Consultant, Pediatric Immunology and Rheumatology, Aster CMI Hospital said:“We may have come across families who say “My child has been unwell for years. He/she falls sick very often, has been admitted thrice/many times in various hospitals and is not growing well.” Some of these families may have children with problems in the immune system. These children get hospitalized on several occasions. They are treated with variety of antibiotics. However, one wonders why should a child fall repeatedly ill? The caregivers do not find a proper answer to their ongoing problems, despite consultations from several doctors. “

“Majority of such children suffer from a dreaded group of diseases called ‘Primary immune deficiency diseases’. Unfortunately, physicians and pediatricians are not well versed with these diseases and this may result in undue delay in the diagnosis. Though considered to be rare diseases, our hospital is witnessing 3-4 new children every month who are diagnosed to have an Immune Deficiency. We strongly believe that this is only the tip of the iceberg and several thousand children will continue to suffer without being diagnosed unless we increase awareness about these diseases amongst doctors and public,” added Dr Bhattad. He is also the first DM super-specialist in Pediatric Immunology in the country and a gold medalist for research in C1q deficiency lupus.

Dr Nitish Shetty, CEO, Aster CMI Hospital, said: “It is a great pleasure to see a young life from another country getting a new bloom in India, thanks to the hard work and efforts of our doctors. We are glad to have a dedicated Immunology and Bone Marrow Transplant Unit (BMT) recognized as the center of excellence by FPID for treating those suffering from very rare, complicated genetic anomalies, the treatment and awareness of which is not available everywhere and among everyone. We strive to create benchmarks in the immunodeficiency treatment as we have done across other segments and hope to save many precious lives in years to come.”

As per a research conducted worldwide, 1 in 2,000 children suffer from an immune deficiency. If these figures are extrapolated to the city of Bangalore, around 5,000 children will have immune deficiency disease. Aster CMI Hospital, Bangalore is equipped with the state-of-art Pediatric Immunology Unit, headed by Dr Sagar Bhattad. Aster Immunology and Bone Marrow Transplant Unit provides end-to-end solution to every child with Immune Deficiency. The Pediatric Immunology Department at Aster CMI Doctors is one amongst a few centers in India to be recognized as Foundation for Primary Immunodeficiency Diseases (FPID) center of excellence in the field of Primary Immunodeficiency (PID). FPID is an international organization based in US that supports the education, early diagnosis, genetic counseling, therapy, and research of PID in both India and the US. It recognizes institutes for its capacities in the diagnosis and treatment of such challenging cases.

Dr Sudhir Gupta, Founder of FPID, said: “Though PIDs are 4 times more common than haemophilia, twice common as cystic fibrosis, and almost as common as multiple sclerosis, yet very few people and physicians know about PIDs.  Therefore, there is a great need to educate the population in general regarding warning signs of PIDs, and practicing physicians to diagnose and treat these patients to prevent complications and death. In India, there are very few institutions where patients with PIDs are diagnosed or treated; the majority of patients remained undiagnosed and die, contributing in part to India’s high infant mortality rate. FPID supports research and treatment of several needy patients at these centers of excellence”.