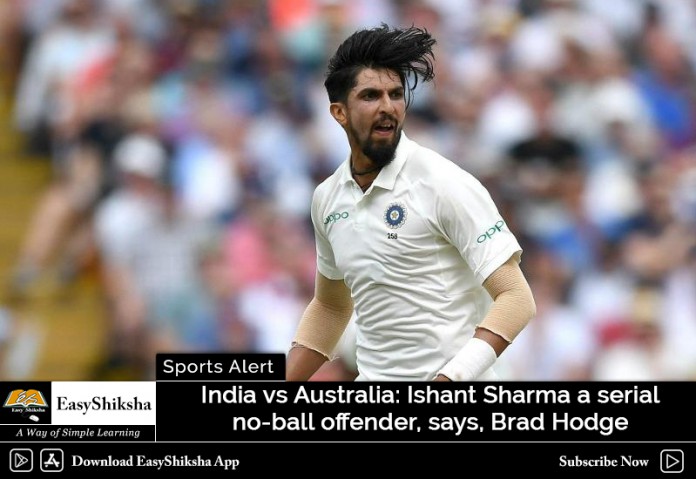 A pot has been stirred up by video proof of Indian fast bowler Ishant Sharma overstepping the line in the first Test of controversy per day out.

Vision out of Fox Sports revealed damning proof of Sharma — India’s most seasoned star with 88 Tests to his name — bowling four out of six no-balls in 2 separate overs during the Test.

One over from the towering was bowled over the mark. Not just one ball was valid.

Former Aussie Test representatives Damien Fleming and Brad Hodge tore into the conundrum about the Bowlology podcast ahead of the crucial attempt to level the series of Australia.

“Seriously, the umpires have to start calling no-balls. I think they have got lazy. It runs to the team — just how many more could have Australia obtained? It is simply no good for anybody,” Fleming explained.

Hodge stated Ishant Sharma was a “serial offender” and “hadn’t learned his lesson” about overstepping the line.

To get a front-foot slip-up in the Test, Sharma was dragged twice away from a recurrence of the error, costing him another on Nathan Lyon in the next innings and an lbw decision on Aaron Finch. Lyon led partnerships that were stitched and Australia 323 run chase but came up to go 1-0 down in the show.

“There is three or four from him (this over). he’s obviously over the frontline and it has not been called. It’s not acceptable from the sport to get this many missed,” Ponting said in Channel Seven commentary. “I’ve said this for numerous years, I frankly do not believe the umpires look at the front line anymore. They were intentionally obvious ones. As we all know they will only ever look at them if a wicket falls, which as far as I am concerned isn’t perfect.”

Damien Fleming accused umpires of being “idle”. “Seriously, the umpires have to start calling no-balls. I think they’ve got idle. It runs to the batting team more would have Australia obtained? It is simply no good for anyone,” Fleming stated on the Bowlology podcast.