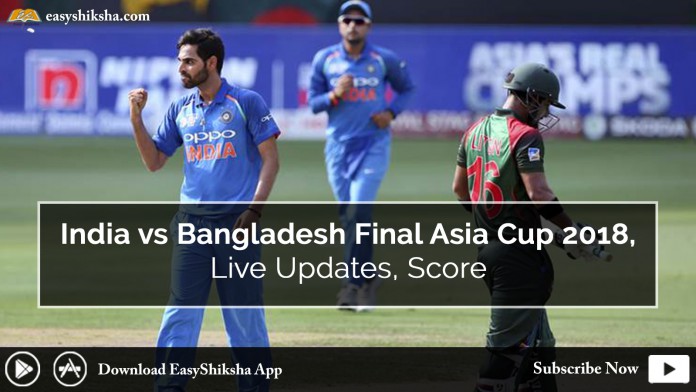 Dubai is going to be much warm today with the heat of the final match of Asia Cup between India and Bangladesh. Rohit Sharma led Indian team enter the finals of the ongoing Asia Cup 2018 as overwhelming favourites, but after their convincing win against Pakistan, Bangladesh will not be an easy prospect.

Shikhar Dhawan has already made it clear that his side is not taking Mahsrafe’s team lightly, and this could well turn out to be an epic contest in the taxing heat of Dubai.

Mashrafe has also asked his team to pull up their socks and be at their absolute best against India on Friday.

So, you now have a team focused on retaining its pride as the top-ranked bunch in the tournament, and the other eager to give some happiness to its passionate fans back home. The usual drill ahead of such a final sees teams going through the paces in the practice area, polishing their skills. This time, neither team turned up for practice. Blame it on the heat and humidity and the cruel schedule. The organisers will certainly have to plan the tournament better. Yet, there is a final to be played, a final that has now come thrice for Bangladesh in Asia Cup cricket in the last four editions. A final that could be a game-changer in their cricketing history.

We take a look at the possible numbers ahead of the finals.

• 4: wickets Bhuvneshwar Kumar needs to complete 100 ODI wickets. He would be the 12th Indian pacer to reach this landmark.

• 7: If India wins the Asia cup title this will be their 7th title, which is the most by any team

• 209: Lowest total successfully defended by Pakistan vs South Africa in 2013

• 210: Biggest partnership between Shikhar Dhawan and Rohit Sharma (IND) for 1st wicket vs Pakistan in 2018.

• 1: India need just 1 victory to complete 700 wins in all formats of cricket

• 0: wins for Bangladesh vs India. Apart from Dhaka, India have never lost against Bangladesh in Asia