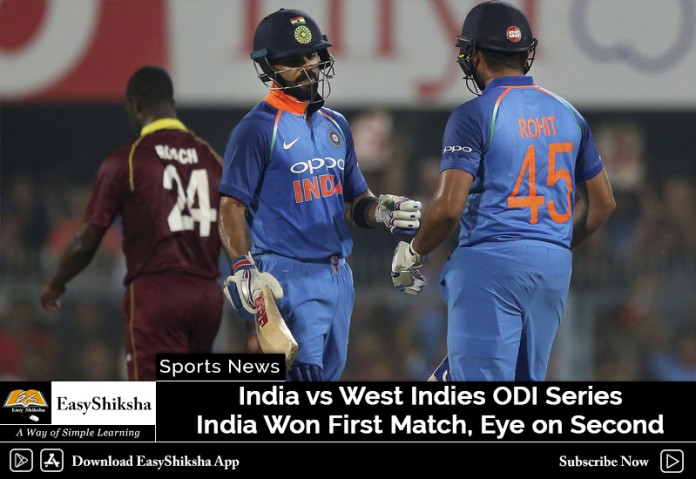 West Indies in on tour of India and this is not going good for them. After losing the India vs West Indies Test Series against host India, this time they have lost the first ODI of the series by 8 wickets. With the massive 246 runs partnership of Sharma and Kohli made the solid ground for India’s win against West Indies. The match was ended with the huge SIX coming from Sharma’s bat. For more updates and extra coverage of sports stay tunes to the EasyShiksha. Hit the bell icon below and stay updated with latest news.

The Indian captain looked in prime touch marching his way to a brilliant century that was elegant on the eye and full of masterstrokes.

Kolkata 2014, Perth 2016, Colombo 2017, Kanpur 2017, and Guwahati 2018. They have made a habit of registering 200-plus partnerships in ODIs. The beauty of this partnership, once again, was the unmitigated trust the two have in each other. They seem genuinely comfortable at each other’s company.

After their 230-run partnership against New Zealand in Kanpur last year, Virat, in an interview to bcci.tv, said: “Generally when we play together, we don’t have to say much because we both understand where the game is going. We both think for the team so it’s always great batting with him because you don’t have to say much. We know if we play our games then the team will benefit and we can score big runs because we both want to play long,” he observed.

The Indian captain put things in perspective after the win on Sunday: “Life isn’t difficult when Rohit is at the other end. It happens rarely when he (Rohit) plays second fiddle. Among the top three, I’ve always preferred the anchor role, but today I felt good about myself and I communicated with Rohit that he should play the anchor’s role,” he explained. Despite the role reversal, the team management will not be complaining one bit. Another ODI in the run-up to the 2019 World Cup, yet another dominant win.