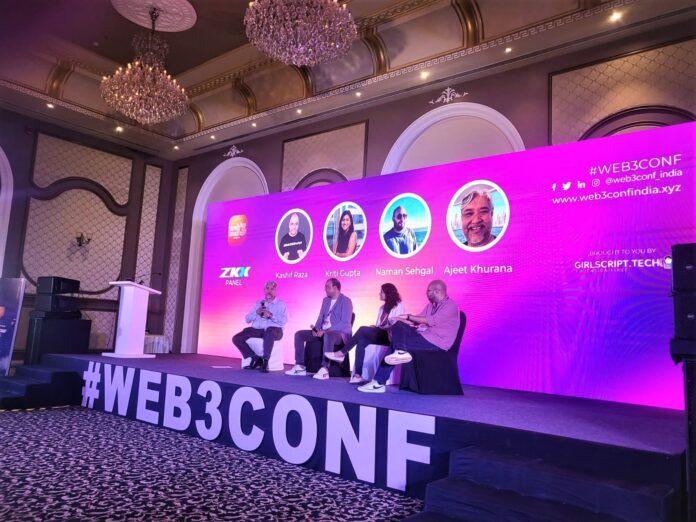 Mumbai, August 2022:  India’s first ever chain-agonistic Web 3.0 Conference saw tech-enthusiasts from across the globe converge at Goa for the three day power-packed event. Atal Incubation Centre at the Goa Institute of Management (AIC-GIM) partnered with GirlScript Foundation to bring the event to the state  and was attended by over 600 techies.

Multiple speakers from various Web 3 associated companies like Alchemy, Solana, Lumos Labs, and Shardeum shared their knowledge with the curious yet driven audiences. Opportunities and challenges related to Blockchain, Cryptocurrency, protocols, NFT and many more were broken down at the conference over the course of the three days.

Vitto Rivabella, Nader Dabit, Francesco Ciulla, Farza Majeed and Teguh K Harmanda were a few of the global innovators in Web3 who flew down to Goa from parts of Europe and the US to make an impact on the young minds present at the conference.

When asked about his experience, Indonesia- based Teguh K Harmanda, COO TokoCrypto, said “This is my first time in India and definitely in Goa. I was pleasantly surprised by how beautiful this tiny state is. It is very important for a country like India to have a specific region which can support the growth of blockchain and crypto. Goa very much reminds me of Bali, an island in Indonesia, which is slowly becoming a hub for blockchain development.”

Rajesh Joshi, CEO AIC-GIM Foundation said, “I have been following the concept of Web3 for a while and I can definitely say that I find it interesting. I look forward to the chance of funding upcoming Web3 startups based in Goa. Goa has tremendous potential to turn into an ideal ecosystem for the growth of startups in India. This doesn’t mean we have to sacrifice the Goa we know and turn it into a concrete jungle. Something like Web3 can be given a space to thrive in the state while keeping in mind Goa’s authenticity. Through this event, we, at AIC-GIM, aim to expose Goans to the next era of the internet and trigger curiosity in them to explore its many facets.”

Workshops and sessions like ‘Create your own Blockchain within minutes’ by Blockchain veteran Aliasgar Merchant and ‘Building your own Metaverse Application’ by Chaal Pritam, a Web3 builder took place simultaneously and garnered much attention and inquisitivity. This highly technological field is quite male-dominated and to encourage more women to explore it, a segment called ‘Women in Web3’ was also a part of the conference and consisted of panel discussions by some of the leading women in the field. They highlighted the challenges faced and some key moments in their respective careers, which moved the women in the audience greatly.

When asked about the future of Web3 in India, Anubha Mane, Founder of GirlScript Foundation said “We can currently see that in Web2 companies like Google and Microsoft, even though the CEOs are Indians, these companies did not originate in India. That is one of the primary things we need to change. India has the labour and the intellect to achieve such heights. There are a myriad of opportunities in the field such as builders, developers, or marketers. I just want people to know that Web3 is not just Cryptos and NFTs. It is a valuable career option as a whole.”

A few budding entrepreneurs also had the opportunity to pitch their ideas to Buidlers Tribe, a Web3 incubator which AIC-GIM had previously partnered up with to launch a blockchain accelerator programme in the state of Goa.