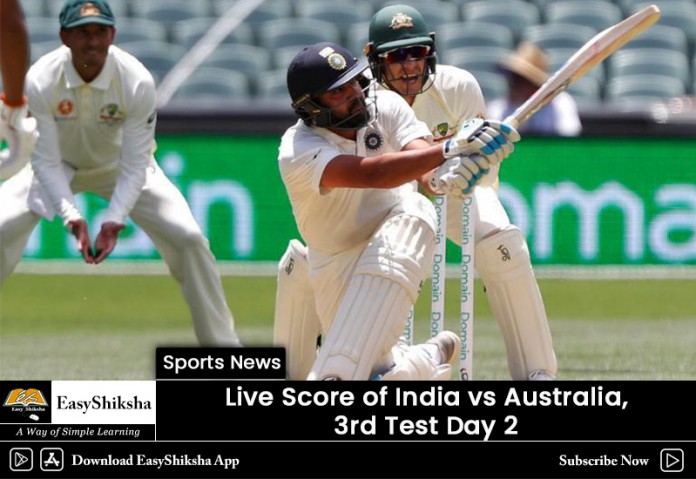 Ajinkya Rahane and Rohit Sharma have obtained the control of the match smoothly following the dismissals of Virat Kohli and Cheteshwar Pujara, who held the fort for nearly five sessions of the next Test. Together with Rahane (30*) and Rohit (13*) about the crease, India reached 346/4 at tea on the second day of the third Test against Australia at the MCG, Melbourne. Live Score The second session saw an exciting contest between the bat and the ball, after which Australian captain Tim Paine drew all of the attention with a few behind the stumps banter.

“If Rohit strikes a six here, I am shifting to Mumbai,” he was heard saying behind the stumps. Before, India made 62 runs with no loss of wicket before lunch. Australian bowlers Pat Cummins, Mitchell Marsh, Mitchell Starc, Josh Hazlewood and Nathan Lyon appeared hostile at events but failed to hit in the first session. On Day 1 in Melbourne, India were 215/2 with Pujara and Kohli in charge. Both the batsmen continued from where they left an opening day. While Cheteshwar Pujara scored his 17th Test century away 280 balls, Virat Kohli became the 2nd greatest run-scorer in Australia after legendary batsman Sachin Tendulkar.

Mayank Agarwal’s notable debut performance was the highlight of the first day, after which Pujara and Kohli waved a 92-run venture stand for the third wicket. On the second day, the captain and the Evaluation specialist took the lead past 150 at the end of the morning session. For Australia, Pat Cummins stays the pick of the attack with three scalps to his title so far. The four-match Evaluation series is currently locked at 1-1.