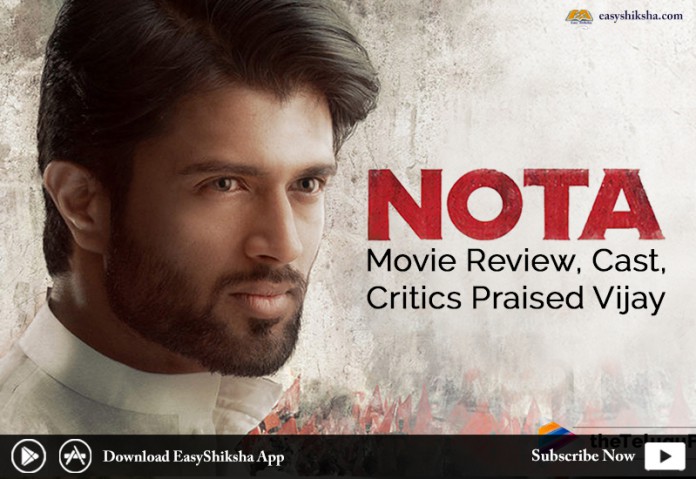 Vijay Deverakonda staring movie NOTA is showing strong political scene that is making movie more interesting to watch but the chemistry of the cast is not up to that level. On the other hand of this Vijay got thumbs up for his performance in NOTA. The movie goes around a partying youngster who resides in London and is now brought back to India to become Chief Minister. This big thing shook the youngster and he gradually start realizing the responsibility he has.

But NOTA doesn’t flesh out this transformation in a gradual way, giving us scenes that show the evolution of this character. All we get is one scene – a tragedy that is staged in a perfunctory manner – to show us that Varun is someone who cares for others. We do get a hint of this earlier, when we are told that he takes care of a few orphan children, but what really makes us buy into Varun’s new-found maturity is Vijay Deverakonda’s assured performance. The film marks his Tamil debut, but the actor does a competent job; there is very little of the slang that we find in actors from other states, though his modulation needs a little work.

He is helped by a journalist and commentator Mahendran (Sathyaraj, modelled on the late Cho Ramaswamy), who was once giving political advice to his dad before they had a fallout. As Varun becomes strong as an able administrator (in handling the Chennai floods), his dad comes out of the jail but is caught in a bomb blast and gets hospitalised. Once out of the hospital, Vinodhan wants to get his chair back and plans to bring down his son’s ministry.

There have been films of the same pattern, but what makes NOTA different is that the director has not added any unwanted commercial ingredients. There is no romance or a leading lady in the film which also does not have any humour and mass action scenes. By making Vijay Devarakonda lead the film, the director has made it more convincing and realistic.

Our overall critic’s rating is not an average of the sub scores below.