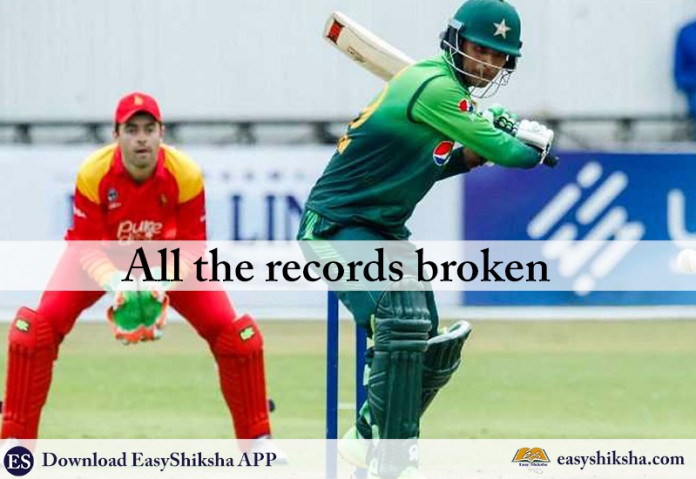 Pakistan’s Openers Zaman and Imam had broken all the records in the 4th ODI against Zimbabwe. With the Zaman’s double century (210*) Pakistan crushed Zimbabwe with score of 399. After bowling Zimbabwe out for a paltry score in the first innings of the match in the 2nd and 3rd ODIs, Pakistan decided to bat first this time around after winning the toss.

Fakhar Zaman and Imam-ul-Haq decimated the opposition bowlers all around the ground and broke multiple records as they put on a 304 run partnership for the first wicket. Zaman went on to score a double century and remained unbeaten on 210. Imam, on the other hand, was dismissed after scoring 113.

Zimbabwe’s response never got going, and they were lucky to avoid a few other ignominious records when they were bowled out in the 43rd over for 155. Zimbabwe’s 244-run defeat was their second heaviest in the ODI format, and they avoided that calamity only through a 69-run sixth wicket stand between Elton Waggumbura and Donald Timpano. But that was as good as it got for the hosts, with leg-spinner Shadai Khan taking four for 28 as Pakistan wrapped up the innings having barely broken a sweat.