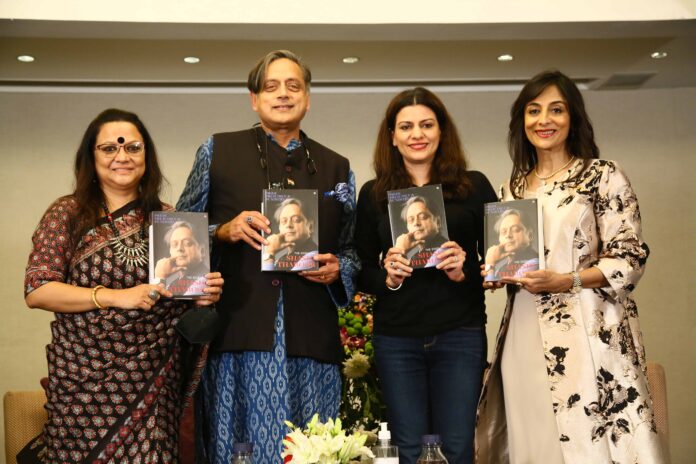 Hyderabad, December 11, 2021…A Kolkata-based nonprofit trust, Prabha Khaitan Foundation (PKF) which is dedicated to socio-cultural welfare and humanitarian causes chose Hyderabad the second in the series for the launch of Dr. Shashi Tharoor’s 23rd book “Pride, Prejudice, and Punditry”. The book is launched under an initiative called ‘Kitaab’ by Prabha Khaitan Foundation.

In my forty years of a book publishing career, this is my 23rd book and it is being launched in your city, Dr. Shashi Tharoor shared in a video message to the book lovers of Hyderabad.

The book was earlier launched in Delhi and now in the City of Biryani, Badminton, and Bahubali, Hyderabad. The book is launched in association with Aleph and Ahsaas-women of Hyderabad.

The launch of the book was followed by a conversation with Ms. Nidhi Razdan, a well-known anchor, known for TV debates on NDTV and a journalist.

Pride, Prejudice, and Punditry mark the culmination of over forty years of Dr. Tharoor’s writings. The book is published by Aleph Book Company.

I took to writing in the year 1981, which completes my 40 years of writing. I wrote this book on the eve of the 10th anniversary of the publishing house Aleph which published this book.

When asked about the challenges of choosing the right expressions he sighted an example where the term cattle class, an expression he used invited wrath from his own party.

Minister of State for External Affairs then, Dr. Shashi Tharoor ran into trouble for a message he posted on Twitter, in which he said he would travel “cattle class” in solidarity with all our “holy cows.”.

A certain word, expression may look apt and appropriate but when translated into a different language it means totally different, he added.

He shared many such examples.  The lesson I learned is not what you think is important but how your audience understands it is important, he explained.

He also spoke about his stint UN and things that followed as a run-up to UN Secretary General’s nomination and how it fizzled out, he explained

Speaking about the present government Dr. Tharoor said the current ruling party with 303 seats in parliament makes democracy a mockery. No one is also defects because of anti-defection laws. Indian Parliament which is supposed to serve as a Checks and balances is unable to do so.

My impression about Modi when I first met in Chennai in 2007 was that he cannot be underestimated. He has all the power to charge up people. But that impression faded away during my subsequent interactions, he added

Our institutions like Parliament are reduced to notices on a board. That is how our government treats Parliament now. We need to strengthen our institutions. RBI, CBI, Information Commission many such institutions which are supposed to be functioning independently are not doing so. We must strengthen them. India has to be the home to everyone. We need the unity of opposition he concluded

He also took questions from Audience and answered them. Later there was a huge queue to take his autograph on the just-launched book

Pride, Prejudice, and Punditry bring together the very best fiction, non-fiction, and poetry from his published books and journalism—as well as many pieces that have been written especially for this volume.

There are ten sections in the book, each devoted to a particular topic. ‘In the Company of Giants’ looks at some of the most important figures of modern Indian history; ‘Into the Maelstrom of Indian Politics’ contains work on the Indian political scene; ‘Our Unruly World’ covers international relations and diplomacy; ‘The Hindu Way’ examines various aspects of the faith; ‘Musings of a Cricket Tragic’ includes some of his finest writing on the sport; ‘You Cannot Be Serious!’ is a light-hearted take on sundry matters; ‘Fragments of an Autobiography’ has poignant essays about his parents and an evocative look at his Kerala heritage; ‘The Spoken Word’ is a selection of his most famous speeches; ‘The Writerly Life’ comprises ruminations on writing and writers; and ‘Selected Fiction and Poetry’ showcases his masterpieces of fiction and poetry.

This book will give those new to the author’s work a panoramic view of the range and depth of his writing. Long-time fans will find fresh material to delight them as also ageless pieces that continue to enchant. Dazzling, inventive, and exuberant, Pride, Prejudice, and Punditry present readers with the essential work of a literary genius.

The host Anjum Babukhan said is honored in promoting the vision of the Prabha Khaitan Foundation as  Ehsaas Women of Hyderabad. Having Dr. Shashi Tharoor grace our Kitaab event was a charm with his worldly and “wordy” wisdom.

About the Author – Shashi Tharoor is the bestselling author of over twenty books, both fiction and non-fiction, besides being a noted critic and columnist. His books include The Great Indian Novel, India: From Midnight to the Millennium and Beyond, An Era of Darkness: The British Empire in India, The New World Disorder and the Indian Imperative (co-authored with Samir Saran), The Paradoxical Prime Minister: Narendra Modi and His India, The Hindu Way: An Introduction to Hinduism, and, most recently, The Battle of Belonging: On Nationalism, Patriotism, and What It Means to Be Indian.

He was a former Under-Secretary-General of the United Nations and a former Minister of State for Human Resource Development and Minister of State for External Affairs in the Government of India. In his third term, he is the longest-serving member of the Lok Sabha from Thiruvananthapuram and chairs Parliament’s Standing Committee on Information Technology. He has won numerous literary awards, including the Sahitya Akademi Award, the Ramnath Goenka Award for Excellence in Books (non-fiction), the Commonwealth Writers’ Prize, and the Crossword Lifetime Achievement Award. He was honored as New Age Politician of the Year by NDTV in 2010 and won the Pravasi Bharatiya Samman, India’s highest honor for overseas Indians, in 2004.