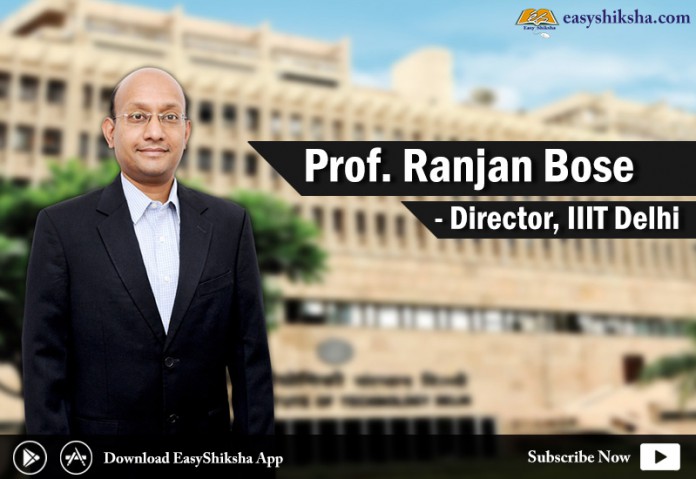 New Delhi: Indraprastha Institute of Information Technology, Delhi (aka. IIIT-Delhi or IIIT-D) was created as a State University by an Act of Delhi Government (The IIIT Delhi Act, 2007) empowering it to do research and development and grant degrees. The Institute’s permanent campus in Okhla became operational in August 2012; the campus is built on 25 acres of land which is located behind the phase III Okhla Industrial Estate.

Prof. Ranjan Bose has taken the charge as the Director of the Institute; Prof. Pankaj Jalote completed his tenure as Director of the institute after serving for a decade.

Prof. Ranjan Bose is an established researcher, teacher and innovator with over 25 years of research and teaching experience, he was serving as Microsoft Chair Professor at the Department of Electrical Engineering, IIT Delhi. He is a B.Tech. of IIT Kanpur and MS and Ph.D. in Electrical Engineering from University of Pennsylvania, Philadelphia, USA.

His research interests lie in the area of secure communications, coding theory, ultra-wide band (UWB) communications, broadband wireless access and wireless security. He has done pioneering research in the area of ‘energy-efficient and secure’ wireless communication systems, with specific mention about the use of chaos theory for secure communications. Prof. Bose has invented the concept of ‘Sequence Clean’, a computationally efficient algorithm and proposed a new metric that reduces the computational complexity significantly, directly impacting breast cancer detection, next-generation radar, air-traffic control and through-wall imaging.

Prof. Bose has published prolifically with 150+ publications in refereed journals and conferences and filed for 16 patents, including one granted US patent, his research work has been widely cited and referred to. He has undertaken various funded research projects amounting to over 33 Million US$. He is a recipient of URSI Young Scientist award in 1999, Humboldt Fellowship in 2000, INAE Young Engineers award in 2003, AICTE Career Award in 2004, BOYSCAST fellowship in 2005 and Dr. Vikram Sarabhai Research Award in 2013. He is a senior member of IEEE (USA) and a fellow of IET (UK). At present, he is Associate Editor of IEEE Access and Member, Editorial Board of Computers & Security, Elsevier and Editor of Frequenz: Journal of RF-Engineering and Telecommunications. He has served as Head, Bharti School of Telecom Technology and Management (IIT Delhi) and was Head of Center of Excellence Cyber Systems & Information Assurance (CoE-CSIA) at IIT Delhi before joining IIIT-Delhi as Director.

Founding Director Prof. Pankaj Jalote has worked with diligence during his decade long journey to build the Institute what IIIT-D is today. 10 years ago he envisioned of building a world class, Industry renowned indigenous Institute and worked hard to achieve this.

It is the result of his efforts only that in such a short duration, the institute has been able to attract the best faculty with all PhD degree holders from world’s best institutions to train and educate engineers of outstanding ability at both undergraduate and postgraduate levels, to become innovators and new product creators. Global and Indian Rankings are also recognizing the institute. QS BRICS ranking 2018 ranked IIIT-Delhi one of the top three universities in New Delhi, IIIT-Delhi was ranked at number 181-190 from the 9000 universities evaluated, making it one of the top 2.0% universities in BRICS Region.  National Assessment and Accreditation Council (NAAC) also accredits the institute at A-level.

Not only this but it is his vision that the PhD program at IIIT-Delhi is truly unique and considered one of the best in the country, the strength of PhD scholars in the institute is even more than some of the well-established IITs. The uniqueness of the program can also be measured by the fact that this 10 year old institute is already producing educators and researchers, some of the scholars have been offered faculty positions at IITs and other prestigious universities in India and abroad. For BTech and MTech as well the institute has started several CS+X and specialized programs under the guidance of Prof. Jalote, which are research centered, industry facing and futuristic.

“As an institution, words are just the means and not the end to thank him enough for his efforts, leadership and affection that he paid for everyone associated with him directly or indirectly during his tenure.I am sure this legacy at the institute will be carried forward in phenomenal manner in the proficient and passionate leadership of Prof. Ranjan Bose, the new director of the institute.” Shri Kiran Karnik, Chairman, BOG.