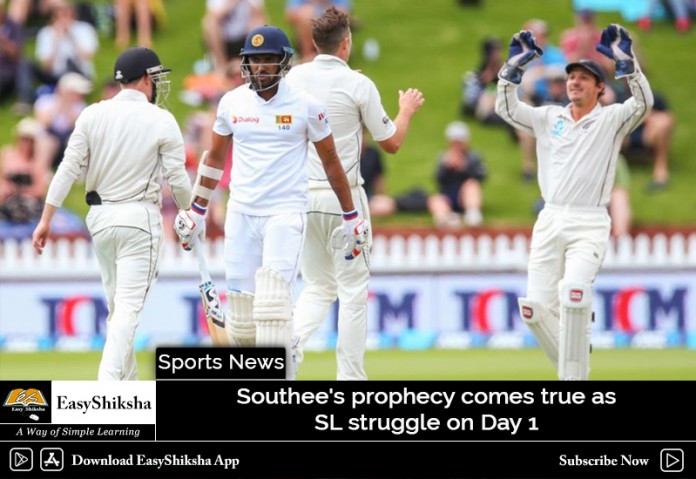 The 30-year-old Southee had spoken on Thursday of enjoying the look of a green pitch in Wellington in his team’s 2-1 series triumph against Pakistan. Sri Lanka reached stumps at 275 for nine, following a stubborn fightback from opener Dimuth Karunaratne, who made 79, and former priest Angelo Mathews (83) rescued the touring side from early trouble.

While Mathews scored his 33rd karunaratne, who had been caught off a no-ball out of Colin de Grandhomme on 33, went on to bring up his 21st Test half-century and defied the onslaught.

He trapped Danushka Gunathilaka in front for one on the last ball of his first over, had Dhananjaya de Silva caught by wicketkeeper BJ Watling for one before Kusal Mendis (2 ) flicked a delivery to Ajaz Patel at midwicket.

He had also mentioned that looks may be deceiving and the Basin Reserve wicket tends to flatten out while a pitch might help initially and become easier for batsmen to score later on.

Niroshan Dickwella remained unbeaten on 73 to further thwart the attack at the session of New Zealand.

Tim Southee’s prophecy prior to the onset of the first Test against Sri Lanka came true on the day of this match as he took his eighth haul on Saturday at the Basin Reserve. The duo combined for a stand of 133 later the visitors had been decreased by seamer Southee for three inside the first four overs to nine. Following Kane Williamson won the toss and chose to bowl, Southee wasted no time in demonstrating his value on a moment.