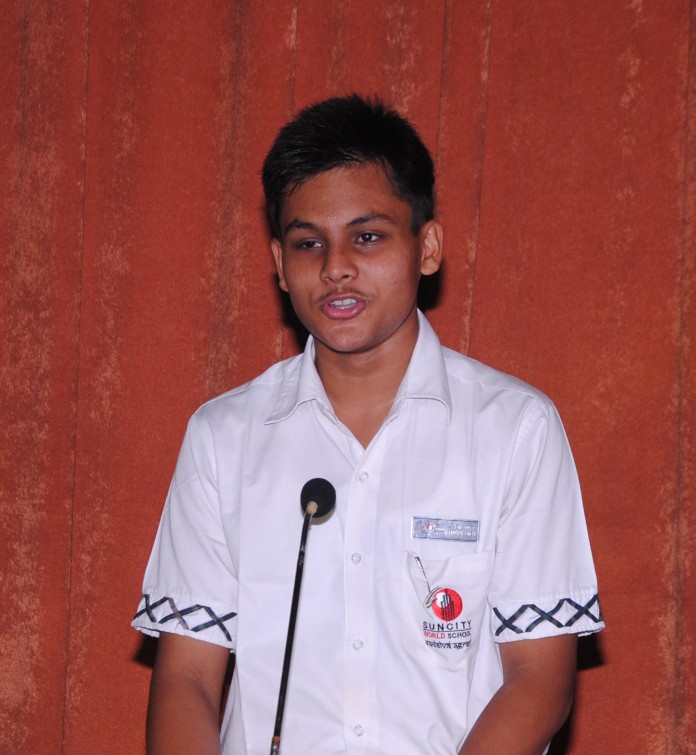 Gurgaon: Everyday while going to his school from his residence in South City 1 area, 17-year-old Ranvijay Singh often used to get concerned seeing many unprivileged children on roadside – wasting their time in playing games. He discussed the issue with his friends of Suncity World School and they decided to make them educated to have a better life.

But, as soon as Ranvijay and his friends started taking classes for those children – mostly from slums, this Class-XI (commerce) boy of Suncity World School met another problem: To have funds for providing books and stationaries for their pupils! Seeing his friends’ shoulders down and several rounds of discussion in this connection, Ranvijay finally proved that where there is a will – there is a way! He developed a mobile-based adventure game – Rope Dash – for raising funds for educating the underprivileged lot of kids.“When I and my school friends started to teach the children during our free time, we soon felt the need of money for providing books and stationaries to them. And, it was the moment when this idea of developing a Mobile App hit my mind for raising funds for them,” he said.

This game application is available on both android and iOS systems. Through the money earned from the gaming application, Singh buys stationary and books for children living in the slums around his residence and school in Sector 53.

This application has an endless adventure video game, in which the players have to cross different hurdles by swinging on a rope, was launched in July this year. The application, with its free and paid versions, has been downloaded hundreds of times on both the platforms. And, the earnings from the game is proving instrumental in fulfilling the needs of the children.“Till the date, I have received nearly one-fourth of my investments. I had earlier planned to procure the books and other things after total return, but that may have been late.

It is important that the children are educated first,” he said, adding, “I am really thankful to all my friends, family and teachers – who have supported me in this initiative. They helped me in getting closer to my aim. We used to have long brainstorming sessions to figure out the revenue model, promotion techniques and also teach the children.”

On the other hand, Suncity School’s Principal Mrs Rupa Chakravarty also appears to be much enthusiastic about the success of her student. “The school is proud of Ranvijay and his achievement.” she said

Coming from the army background, Singh said he wants to be an entrepreneur and maximise his reach to the uneducated children of the city.

ALSO READ: Integration of design skills with education by dmes