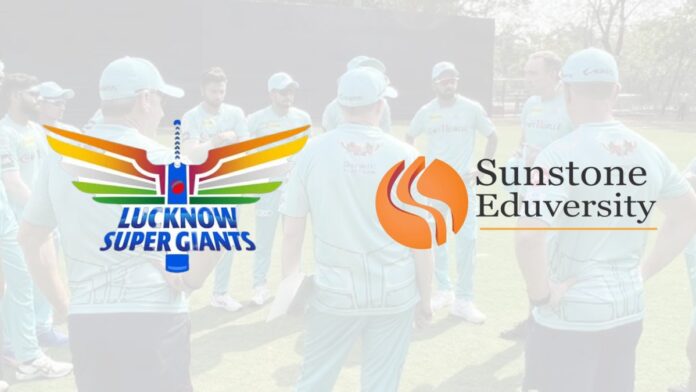 India, Thursday, 24 March 2022: Sunstone Eduversity, one of India’s leading higher education service providers, has announced its collaboration as associate partners with the Indian Premier League’s (IPL) newest franchise, Lucknow Super Giants. Lucknow Super Giants is one of the two new teams that are making their debut in the IPL this year.

Commenting on the partnership, Piyush Nangru, Co-Founder & COO, Sunstone Eduversity said, “We are thrilled to partner with Lucknow Super Giants in the upcoming IPL Season. In a country like ours, where everyone is enthralled by cricket, this alliance provides an  emerging education brand like Sunstone with an excellent opportunity to engage with young people who aspire to build promising futures for themselves.”

Speaking further on the partnership, Alekhya Chakrabarty, Head of Marketing, Sunstone Eduversity said, “At Sunstone we always think youth first, and hence an association of the brand with the Indian Premier League felt just right. The target market and brand vision of Sunstone is resonant with what Lucknow Super Giants also has, so it was a natural choice as our partner in the IPL. “

Speaking on the association, Raghu Iyer, CEO, RPSG sports said, “We are delighted to have Sunstone Eduversity on board as Lucknow Super Giants’ sponsor. We appreciate their confidence in our new franchise and are optimistic that this will be a successful and long-standing partnership. We look forward to this association helping us strengthen our connection with the student communities.”

As part of the association, Sunstone launches #JeetegaSparkHi campaign- to announce scholarships for deserving students for the duration of IPL tournament. #JeetegaSparkHi is an initiative by Sunstone which values the ‘spark’ in each student. The campaign is in line with Sunstone’s belief system which celebrates the potential of every student and gives them an ecosystem to grow and tread a path of success.