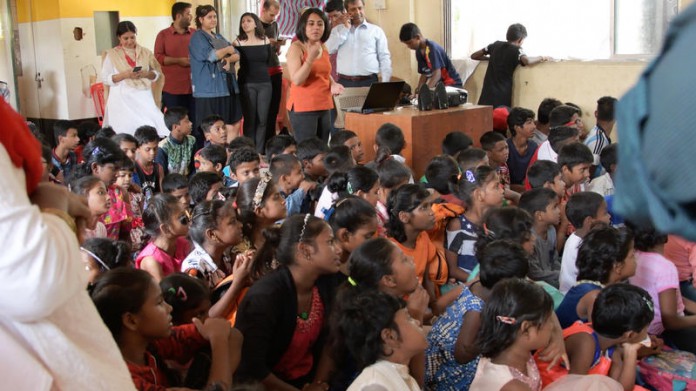 Mumbai, April 15, 2019: The Open Door Project, a path breaking initiative to induce more and more private schools to take the lead in creating space for disadvantaged children in their schools and give them an education they will otherwise probably miss, was today formally launched in Mumbai.

Despite so much being done at Government, NGO and Private sector level, one third of Indian children do not have access to quality education and over 8 million are out of schools. Government and individual actions are laudatory, but the size of the problem exceeds the best efforts yet. It is therefore a time to seek institutional participation to contribute to this enormous and yet the most critical task – of ensuring the there is no child left without an education.

The Open Door Project started with a simple observation – That a child, hungry for knowledge, will always find a way to learn. An initiative of The Millennium Schools, a national chain of  private not for profit schools, educating over 35,000 students , which took the lead and decided to open its portals to disadvantaged children from surrounding and neighboring areas after school hours, The Open Door Project wants to ensure that children from slums and the areas around are offered similar facilities and education as children from well off families who make up the roster in the schools – same teaching standards, same facilities, same quality of education.

The Open Door Project is also aligning with NGOs, supporting their effort in reaching out to disadvantaged children. A start has already been made with Kat Katha which works with Children of sex workers and now Salaam Baalak Trust, which works with street Children.

The Open Door Project is being appropriately launched in the backdrop of the World Street Children’s Day (12th April) with a special event hosted by Salaam Balaak Trust in Andheri East. On the occasion, the founder of The Millennium Schools , Shantanu Prakash who has envisioned the Open Door Project, will unveil a special film called” Bhukkad- the hungry one” created by the award winning Chief Creative Officer of FCB Ulka, Swati Bhattacharya.

Speaking on the initiative, Shantanu Prakash, Founder of The Millennium Schools, said, “The Open Door Project is an institutional response by The Millennium Schools to the problem of children outside the education net. It is my belief that a large-scale campaign that enjoys collective efforts of private schools can help mitigate the crisis of over 8 million out-of-school kids in India.  I am glad to see that Bhukkad – the film – resonates with the philosophy of the Millennium Schools which has love for learning and joyful learning as it’s bedrock”

“Our schools are opening doors for the children from slums and red-light areas. We’ll happy to impart education to them. To make India great again, let’s come together and make every citizen educated and empowered,” added Shantanu.

Adding her insights, Swati Bhattacharya, CCO, FCB Ulka said, “The film Bhukkad encapsulates the spirit of The Open Door Project. Drawing on this story of a young boy hungering for an education, we hope that this film inspires many other children to seek education and similarly many other institutions to rise to the challenge and the fulfil the dire need for expanding the net to all our children who are missing an education.”

Speaking on the Initiative, Shahnaz Botawala Sharma, Trustee Salaam Baalak Trust said, “Salaam Baalak Trust supports education for the underprivileged child and is participating in this project to support and further this goal. Education is a priority and we look forward to more such initiatives to get our children “off the street and on their feet”.

About The Open Door Project:

It is an initiative of The Millennium Schools and its Founder Shantanu Prakash. More than half of India’s children don’t go to school. In a country seen as an emerging superpower, millions of children are being left out of its progress story. Education is a fundamental right of every child and delivering quality education to children is the duty of the citizens. The Open Door Project is an effort to build an equitable society through education.

About the film ‘Bhukkad- the hungry one’:

Hunger is powerful, and this is portrayed by the glimpse into the life of a young boy. It follows him around as he tries to find ways to satiate his hunger for knowledge. The film exemplifies the need for hunger by portraying how despite his shortcomings, he found a way to learn, fueled solely by his hunger.

Link to the film: https://youtu.be/BP9kqPh4bHM

The vision of The Millennium School “is committed to nurture the inherent potential and talent of each child, creating lifelong learners who will be the leaders of tomorrow.” The school aspires to equip students with skills that will help them excel in life and prepare for their greater role of shaping the Indian Millennium tomorrow. From this mindscape, the endeavour is to develop conscientious citizens. Citizens who are open-minded, innovative, creative, critical thinkers, self- disciplined yet energetic in thought and action.

FCB Ulka Advertising is the flagship agency of the FCB India Network, one of the fastest growing networks in the country. The network amongst the top 5 fully integrated marketing communications company in India. with over 120 Indian & Multinational clients and 700 professionals working across six offices in seven cities. The agency was established in 1961 where it has been an epitome of brand building; carrying forward the rich lineage. The agency now upholds the brand philosophy of ‘Never Finished’ by their storytelling praxis of not just changing attitudes but changing consumer behaviour and understanding the deeper brand purpose with a new planning protocol – Brand Bedrock.