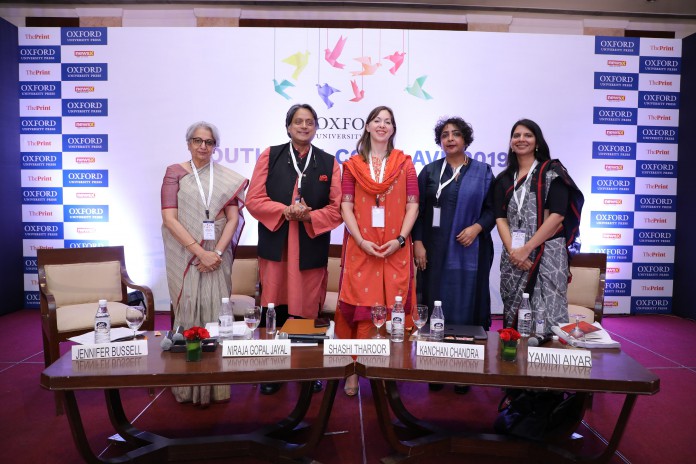 For years now, South Asia has been one of the fastest growing regions in the world. However, this rapid economic growth has been accompanied by income inequalities, education and health inequities, environmental degradation, macroeconomic imbalances — even macroeconomic crises in some cases — and, in general, uneven public service delivery to its citizens. Following its successful launch in 2017, the South Asia Conclave has become one of the major platforms to talk about issues pertaining to South Asia, and is aimed at developing a deeper understanding of these issues.

The conclave was curated & chaired by Ashutosh Varshney (Sol Goldman Professor of International Studies and the Social Sciences and Professor of Political Science at Brown University), while the insightful welcome note was delivered by Niko Pfund (Global Publisher, Academic Division, Oxford University Press)

The focus was on Manuben Gandhi’s life – the impact of her life and times with Mahatma Gandhi between the years 1943 and 1948. Manu Gandhi joined Gandhi’s entourage in 1943 as an aide to his ailing wife Kasturba in the Aga Khan Palace prison, and remained with him and his family until his assassination. The panelists deliberated over Gandhi’s practices and his ways of instilling discipline into his disciples, the act of being accounted for or accounting every single event of the day – something that helped Manu Gandhi to enhance her writing skills from mere listicles to sentences and finally to beautifully flowing paragraphs describing everything but the walk that Gandhi and Manu Ben took together. The question of the nature of consent in the time of British Raj and in the current times, what did it mean to say yes or no among other deliberations around Gandhi’s troubled sexuality were discussed.

The session focussed on the turbulent relations between India and Pakistan and the exponential increase in ceasefire violations (CFVs). The deeper understanding of these violations owing to their potential to not only cause a crisis but also escalate an ongoing one. Line on Fire, part of the Oxford International Relations in South Asia series, postulates that the incorrect diagnosis of the reasons behind CFVs has led to wrong policies being adopted by both India and Pakistan to deal with the recurrent violations. The age old discussion revolving around the CFVs on the border were mulled over in this session – instances of people losing their lives on account of lost cricket matches, border violation by the enemies treading on moonless nights, among others. Manoj Joshi spoke about how it is not enough to have conversations only as reference points at the LoC but in order to maintain peace and tranquility things need to be placed in order like that with China. Suhasini Haidar also noted how both the sides of the border have “Adopted the language of one side or the other” with the usage of words such as “unprovoked attack”, “infiltration”, “retaliatory fire”. It was stressed that loss of lives on the other side of the border should also be documented so that a better understanding can emerge minus jingoism. The panel also noted how the civilian casualties are no longer brought to light and how we have learned to dehumanize from the problem and how “we need to find ways to humanize the situation” as noted by Suhasini and how there is no real regular explanation on accountability, and the fact that it is the time to question among other things.

The session focused on the aspect of how Lashkar-e-Tayyaba, a jihadist terrorist group, functions in Pakistan and beyond by translating and commenting upon a range of publications produced and disseminated by Dar-ul-Andlus, the publishing wing of LeT. The canon of Islamist texts is the most popular and potent weapon in LeT’s arsenal, and its scrutiny offers insights into how and who the group recruits; LeT’s justification for jihad; its vision of itself in global and regional politics; the enemies LeT identifies and the allies it cultivates. The session started with a rather insightful remark from C. Christine Fair when she referred to LeT as “Disciplined Killer” and LeT’s comparision to Jaish and ISIS. How these ‘militant’ groups are in a competition with each other.  The ideology of Lashkar and a lot of the paintings and art work are in contrast with the ideology that the militant organization would similarly break India. Questions pertaining to why Lashkar is more desirable, its comparison to the any other form of government military, repositioning of Jaish in Kashmir, the influence of such militant activities on election, among others.

The poignant session noted how capacity and capability constructs any kind of narrative around victims and survivors of gendered violence. The panel recollected the heartwrenching case of Bilkis Bano who, being a Muslim woman, had to fight multiple battles and not just along the lines of gender. This complexity opened up larger questions on law and legality with Radhika Govindrajan observing if the law itself is not extra-legal. Madhav Khosla emphasized on the nature of truth as it is produced today—he said that it is perhaps not an empirical category rather a moral one as decided by the hegemonic norms. Pratiksha Baxi made an important point about misplaced care also being a form of violence when Poulami Roychowdhury recounted a film where NGO workers disrobe a survivor of sexual violence in order to liberate her. The panel raised several challenging questions with respect to kinship, law, citizenship, and accessibility of legal institutions and infrastructures.

The fifth session witnessed a stimulating discussion based on the tittle, Clients and Constituents: Political Responsiveness in Patronage Democracies by Jennifer Bussell, Assistant Professor of Political Science and Public Policy, University of California, Berkeley

The session focused on ‘patronage democracies’.  Legislators in ‘patronage democracies’ provide substantial constituency service: non-contingent, direct assistance to individual citizens. It aimed to waddress an important concern that when the uneven character of access to services at the local level—often due to biased allocation on the part of local intermediaries—generates demand for help from higher-level officials, does the nature of these appeals provide incentives for politicians to help their constituents obtain public benefits? . The discussion also shed light on issues such as, given the potential for an under-appreciated form of democratic accountability, one that is rooted in the character of patronage-based politics, given the rapidly evolving socio-political constellations. Niraja Gopal Jayal (Professor, Centre for the Study of Law and Governance, Jawaharlal Nehru University, New Delhi), moderated the session and he panellists included Kanchan Chandra (Professor of Politics, New York University), Yamini Aiyar (President and Chief Executive, Centre for Policy Research), Shashi Tharoor (Member of Parliament, Lok Sabha.  The interrogation included the question of constituency service, and the first point of contact for the citizen is – whether it is a bureaucrat or politician, and the right kind of framework of representation of democracy in India, among others.

Kanchan Chandra noted how Politics in India is dominated by politicians’ words, how the culture of politicians being accessible is perpetuated in the constituency, the MPs spending the 2/3rd of their time in direct interactions with citizens, whether it is the responsiveness and services or lack of it, which also depends on the channels of communication. Yamini Aiyar, also mentioned how “we simply don’t talk about the geographical scale of one constituency and the roles of MPs on a larger scale” with respect to their duty towards the constituencies, and policy making and deliberations in the parliament. It was noted that the role constituency-based politics is complex in making demands from MPs and MLAs.

The insightful conference ended with an enriching concluding note Ashutosh Varshney, Sol Goldman Professor of International Studies and the Social Sciences and Professor of Political Science at Brown University

Oxford University Press is a department of the University of Oxford. It furthers the University’s objective of excellence in research, scholarship, and education by publishing worldwide. OUP is the world’s largest university press with the widest global presence. It currently publishes several education, reference and academic publications every year, has offices in around 60 countries, and employs nearly 6,000 people worldwide. OUP’s diverse publishing programme includes scholarly work in all academic disciplines, school and college textbooks, children’s books, materials for teaching English, dictionaries and reference books, and academic journals. OUP also provides digital learning solutions designed to meet learning needs of the contemporary learner. Learn more about OUP at www.oup.com