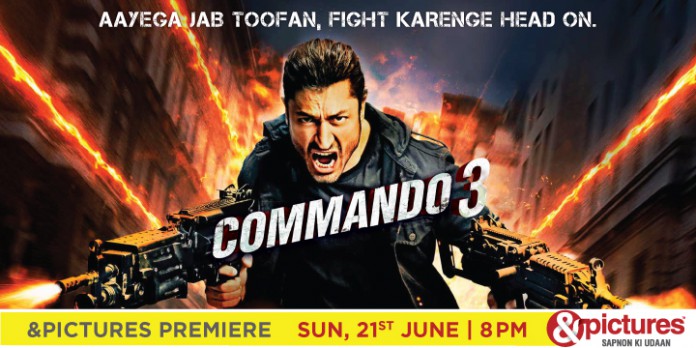 One nation, One mission and One unstoppable daredevil!This Sunday, buckle up as & pictures – Naye India Ka Blockbusterbrings to you the toofani, action-packed premiere of Commando 3.With triple the action and thrill, the valiant commando Karan Singh Dogra is back to save his nation one roundhouse kick at a time. The enemies he is up against are many and varied, but with his strong determination, the fearless commando is all set to fight multiple obstacles that come his way head on. Directed by Aditya Dutt, the third installment of the franchise, Commando 3 brings to your television screens a thrilling storyline and action like never before! Reprising his role as Commando Karan Singh Dogra is Vidyut Jammwal along with Adah Sharma as Bhavna Reddy, Angira Dhar as the British Intelligence Officer, Mallika Sood and Gulshan Devaiah as Buraq Ansari, the Antagonist. So, this 21st June at 8 pm brace yourself to witness Commando Karan Singh Dogra ka baap level action.

Talking about the film and his character, Gulshan Devaiah said, “I wanted to do something exciting and out-and-out commercial. With Commando 3, I got that opportunity and the freedom to enact a role as per my interpretation. I have added my own touch and nuances to Buraq’s character. He’s not a stereotypical villain but someone who has grown up in the lap of luxury. Technically, he has never been marginalized and has no reason to feel the way he does. From my point of view, he is a glory-seeker who wants to go down in history for his deeds. While I understood that he is a Londoner and is well-educated, what I also had to keep in mind is the style of speaking and the mannerisms which I felt were equally important. I also had to understand the sensibility and the story that the director was trying to say and had to tailor my performance accordingly. Overall, portraying the role of Buraq was a challenge. With the movie premiering on &pictures, I hope the audience appreciates my interpretation and efforts.”

Speaking about her debut film, Angira Dhar said, “Commando 3 marked my debut in Bollywood and starting my journey with such a film was an unforgettable experience. The movie no doubt has its moments of die-hard patriotic love, but in the end, the film covers a much broader aspect – which is something that you should lookout for. There are moments of action that helps us engage with the audience in the movie. I am a fan of watching women performing tough action sequences on screen, and I am so glad that we are finally getting a chance to depict such scenes in Bollywood. The audience in India is also now opening up to movies where women are not just a part of the background but have an equally important part to play. They are capable of doing action and heavy-duty stunts as well. If you are one such ardent action lover, Commando 3 is the movie for you. So, tune into to &pictures on 21stJune to enjoy the action-packed film”

Speaking about the top-notch action in the film, Vidyut Jammwal said, “I am quite thrilled to be associated with one of the finest action thriller franchise. With every movie in the Commando franchise, we aim at raising the bar of action in addition to introducing new sequences and stunts. In the first movie, we incorporated one form of Kalaripayattu in the stunts, in the second the character demanded that I bulked up and now in Commando 3, we have returned with another form of Kalaripayattu for which I had to return to my lean frame and reacquaint my body with flexibility. This movie is about bringing the nation together, forgetting the differences that arise from caste, creed and religion and working towards a better tomorrow. It is an engrossing story and our director Aditya has visualized great action for it, giving it a different spin.”

With a sense of something big taking place in the nation, the Mumbai Police arrest three terror suspects and hand them over to commando Karan Singh Dogra to solve the case. On further investigation, Karan realizes that the mastermind behind the terror threats is in London and is remotely operating from there. With an attempt to put an end to it, the Indian Government sends Karan along with an encounter specialist cop Bhavana Reddy. To help Karan, British intelligence officers Mallika Sood and Armaan are assigned to the mission. On the other hand, Buraq Ansari, the mastermind who specializes in brainwashing the youth into terrorism for his own selfish motives tries to capture and execute the Indian agents before they arrest him. And, thus begins the cats and mouse chase.