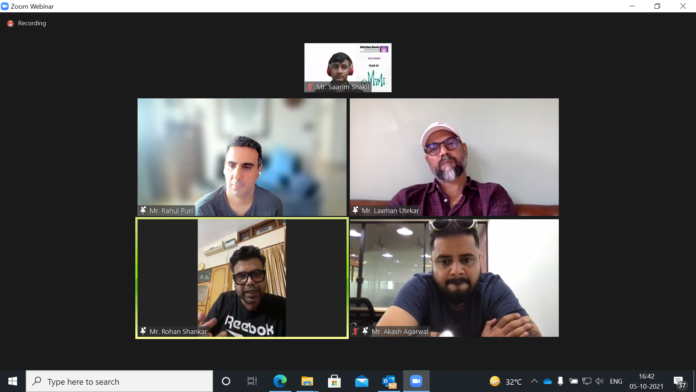 November 15th, 2021: Whistling Woods International (WWI), Asia’ premier institute of film, communication & creative arts has always strived to fulfil its mission of encouraging creativity amongst the young aspirants through quality education. And masterclass sessions with industry experts are one of the best methods to achieve it. These exclusive masterclass sessions offer unique and exceptional opportunities to the students to get creative insights into their respective crafts. With the commencement of the 2021 academic year, WWI hosted the first film forum session with
the team of the acclaimed film, Mimi. Present for the session was the film’s writer & director, Laxman Utekar, writer Rohan Shankar and cinematographer Akash Agarwal. Moderating the session was Rahul Puri, Head of Academic, WWI, who led a highly interactive and insightful session. The informative masterclass session started with a series of questions that helped the students understand the role and contribution of each guest to the film. When asked about how the idea for the film originated, Laxman Utekar stated, “Post the release of Luka Chuppi, we had the rights of the 2011-Marathi film, Mala Aai Vhhaychy!. Instead of opting for an exact remake, we took the soul of the Marathi film and created our own world through the character of Mimi.”

Shedding light on a very sensitive topic of surrogacy, the makers of the film stated that while the film was still in the writing stage, they had decided to cast Kriti Sanon & Pankaj Tripathi in the lead role as Mimi & Bhanu. “Understanding the fact that the film is based on a very fragile topic, I wanted the character of Mimi to be played by someone I’m comfortable working with. And having had an awesome experience working with Kriti previously, I was convinced she is the apt person to play the character of Mimi. She is extremely talented, hardworking, and intelligent. And once the character of Bhanucame into the picture, we instantly wanted Pankaj Ji to play that role and luckily, we could rope in both of them for the project”, said Laxman Utekar.

The discussion further progressed to highlight the way the film was written, the cast and location scouting happened and how every element came together for the film to finally materialise. While answering the student’ questions about how it was collaborating with Laxman Utekar, both Rohan Shankar and Akash Agarwal praised the director for letting them explore and work without any set boundaries. “The best thing about Laxman sir is that he is very brave to go beyond the boundaries. He gives us the freedom to explore. Working with him is easy and fun”, shared Rohan Shankar.
As the masterclass came to an end, the team of Mimi parted with words of wisdom for the students to follow in their lives. Laxman Utekar said, “Whatever you create, create with passion and enjoy it as people are going to see and praise your creations for years to come.” Rohan Shankar advised the students to keep meeting people and continue working with immense passion. And finally, Akash Agarwal shared, “Never stop learning and keep developing one’s skills.”

Whistling Woods International (WWI) is Asia’s premier Film, Communication, and Creative Arts Institute. Founded by one of India’s leading filmmakers – Subhash Ghai, WWI is one of the largest and best media institutes in the country. ‘The Hollywood Reporter has rated Whistling Woods International as one of the Ten Best Film Schools in the world in 2014, 2013 & 2010. WWI offers courses that vary in duration from 1 year to 4 years catering to all major verticals of the Media & Entertainment industry, namely Acting, Animation, Cinematography, Direction, Editing, Game Design, Music, Producing, Production Design, Screenwriting, Sound, Visual Effects, Media Management.