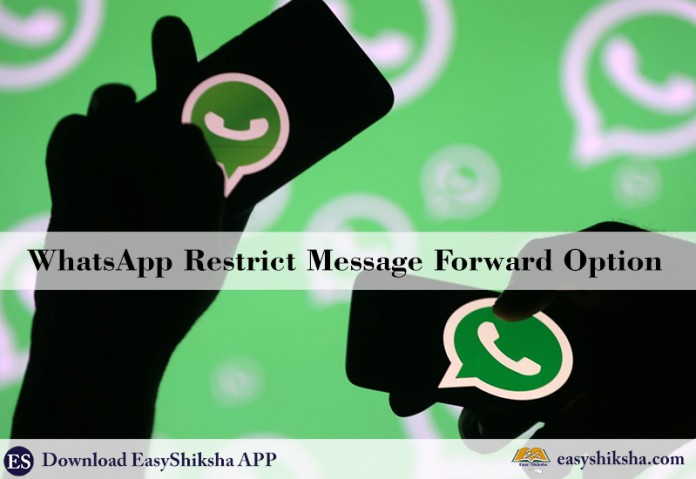 Indian Govt. is been trying to prevent fake news and media from spreading. In a way to prevent it on its platform, WhatsApp has now decided to recreate some measurement. According to the report WhatsApp has announced restriction over mass spread/ forward of any media and message.

In a statement on Friday, Whatsapp said it is launching a test to limit forwarding on WhatsApp. “In India — where people forward more messages, photos, and videos, than any other country in the world — we’ll also test a lower limit of five chats at once and we’ll remove the quick forward button next to media messages.”

This new restriction means that if a media message is forwarded five times from the same account, then WhatsApp will disable the option for forwarding it further. However, the feature does not appear to be live for all India users yet. We found that we could forward the same media file to more than five contacts at once.

WhatsApp in a blog post revealed that India is the market where people forward more messages, photos and videos than any other country in the world. India is the app’s biggest market with over 250 million users. It is also the market where WhatsApp is facing increasing scrutiny over mob violence and lynching reports after misleading videos went viral on the platform.

More changes to forwarding; We built WhatsApp as a private messaging app – a simple, secure, and reliable way to communicate with friends and family. And as we’ve added new features, we’ve been careful to try and keep that feeling of intimacy, which people say they love.

A few years back we added a feature to WhatsApp that lets you forward a message to multiple chats at once.

Today, we’re launching a test to limit forwarding that will apply to everyone using WhatsApp. In India – where people forward more messages, photos, and videos than any other country in the world – we’ll also test a lower limit of 5 chats at once and we’ll remove the quick forward button next to media messages.

We believe that these changes – which we’ll continue to evaluate – will help keep WhatsApp the way it was designed to be: a private messaging app. We are deeply committed to your safety and privacy which is why WhatsApp is end-to-end encrypted, and we’ll continue to improve our app with features like this one.