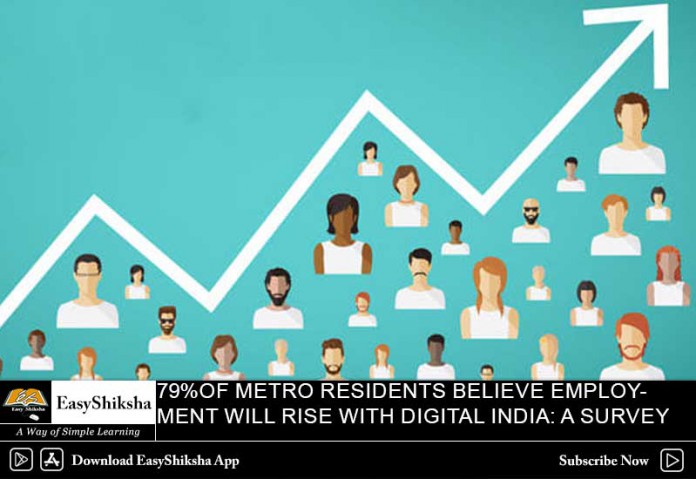 New Delhi, June 10, 2019: The man who coined and implemented ‘Digital India’ is back in government and with him the hopes of doing wonders in the digital space has picked up pace. Seventy-nine percent of the people have firm faith that the digital India will contribute to employment access in all sectors in next 5 years under the current Government and thus reduce unemployment. This was revealed in latest survey by Vivoki India, a research analytics and knowledge processing startup, which surveyed 5000 people in the metros. The hope is unprecedented against the backdrop that the Periodic Labour Force Survey (PLFS) put out by National Statistic Office (NSO has highlighted worrying trends in the job market as the employment rate among young urban jobseekers has been on the rise. Overwhelming response in the survey came for social security and safety as 82% felt that it should be top of the charts.

The survey was done to highlight the demands and expectation of Digital India — the youth — from the current government. “Despite taking effort to improve e-governance, India stood at 107th place in the world in e-governance according to UN e-governance Index. Many initiatives have been taken towards introduction of Information Technology to empower people in areas relating to health, education, labour and employment, commerce, etc., in the past. We can clearly see the difference in number of internet users and improved e-governance. Still, there is digital illiteracy in many parts of India. ‘Digital India’ will be a success, when its benefits are available to each and every citizen of India,” says Deepa Sayal, Executive Director, Vivoki India and Director & Co-Founder, ADG Online Solutions.

Further, 74% respondents feel that employment scare can be handled if current government undertake empowerment of citizens through Digital Literacy and universal access to Digital Skill set. Digital India is a programme to transform India into digitally-empowered society and knowledge economy. Launched on July 1, 2015, by Prime Minister Narendra Modi, it is both enabler and beneficiary of other key Government of India schemes, such as, Make in India and Start Up India and many others. Seventy-two per cent of the urban respondents feel that the rural internet participation should increase to contribute to the GDP in longer run and strengthen economy under the current Government.

Respondents also felt that role of GeM marketplace is also important in improving the Indian economy. Government e-Marketplace (GeM), a national public procurement platform, will turn three soon and last year August’s data shows that over $1.45 Bn (INR 10,000 Cr) in Gross Merchandise Value (GMV) through more than $8.96 K (INR 6.16 Lacs) transactions on the platform. 63% felt that GEM e-marketplace (GEM 3.0) benchmarking should be better aligned by the Government for the SMB and SME Marketplace in order to build the Indian Economy.

Prime Minister Modi’s vision of Digital India is to transform the country into a digitally empowered society, but when it comes to cashless economy the respondents are divided. When asked ‘Should the current Government work towards making India a cashless Economy to improve upon overall CAGR’, only 53% of the respondents supported cashless economy and 44% were against it.

Response to Tele-medicine and Mobile Healthcare Facilities too was lukewarm as only 52% of the respondents said aye and 38% were for ‘no’ regarding assigning top priority to the new government for it.

Vivoki is a leading research analytics, and knowledge processing firm that empowers business globally with intelligent solutions across multiple sectors. It is headed by Deepa Sayal — a Digital Mentor, Incubator, Entrepreneur and a tech evangelist — who also consults Digital Impact Programs for a large number of Indian and International clients such as Election Commission of India, Hon’ble Chief Minister of Uttar Pradesh (IPRD), Broadcasting Engineering Corporation of India, Ministry of Statistics and Program Implementation Ltd along with others such as Cisco, NEC, Western Digital, Asus, Toshiba, JBL etc.

Vivoki’s coactive atmosphere and knowledge-based ecosystem help to consistently redefine and provide customized solutions to clients. Vivoki operates in multiple industries and sectors, specializing in unique research methodologies which are applicable to a diverse market range.

The ascent of VFX in the future: from cutting-edge concepts to...