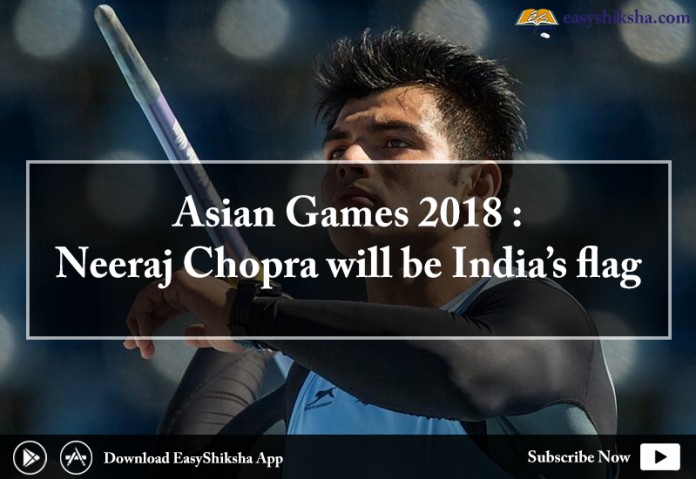 Javelin thrower star Neeraj Chopra will be India’s flag bearer in the opening ceremony of the upcoming Asian Games 2018. Chopra, who won the gold medal in Commonwealth Games 2018 event in Gold Coast earlier this year, will lead India’s contingent in the multi-sport event. The announcement was made by Indian Olympic Association (IOA) president Narinder Batra on Friday during the send-off ceremony organised for the Indian contingent.

The star athlete struck a gold medal in the Savo Games in Finland after he defeated his Chinese Taipei rival Chao-Tsun Cheng in July, after throwing 85.69 m to warm up for the Asian Games showdown. He also holds the national record of throwing 87.43 m, which he accomplished during the first leg of the Diamond League Meeting in Doha in May.

“I am thrilled to be chosen as flag bearer of the Asian Games. It is a huge honour to be leading the Indian contingent in such a big event,” Neeraj told news agency PTI from his training base in Finland.

“I did not know this as I was not told earlier about this. This is going to be my first (to be a flag bearer) and it’s happening in the Asian Games,” he added.

Despite having to travel to Jakarta a few days earlier than his Javelin final, which is scheduled to take place on August 27, Chopra insisted that he is happy to reach a few days earlier for the opening ceremony. “My javelin final is on August 27 but now I have to be there in Jakarta before August 18 when the opening ceremony is being held. But it is not an issue and I am happy,” he said.

With the 20-year old leading the Asian Charts so far this season, Chopra is expected to be India’s best gold medal prospect in Jakarta. The 2018 Asian Games will take place from August 18 to September 2 and will be held in Indonesian cities of Jakarta and Palembang. Track and field events start on August 25 in the Asian Games.