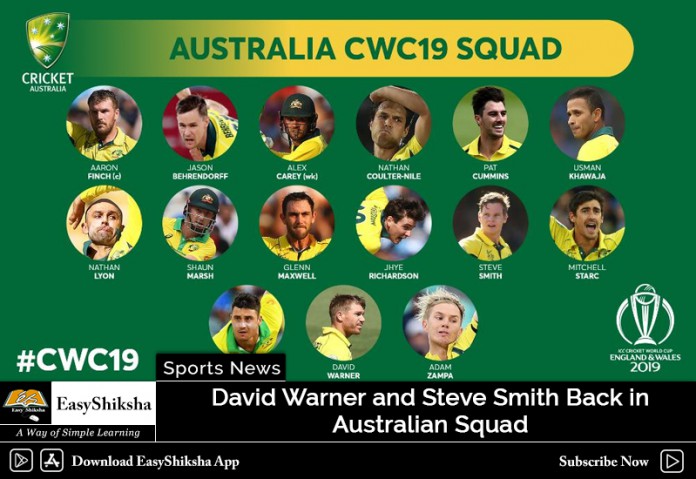 Australia Cricket Team David Warner, former Australian Captain and Steve Smith will be in the squad for the 2019 World Cup Series. They have completed their ban for the ball-tampering. They have dropped two big names, Peter Handscomb and fast bowler Josh Hazlewood, from that list of final 15-man squad for the series.

Former skipper Smith and Warner were eligible for Aaron Finch’s national side after their 12-month suspensions for ball-tampering ended last month but their return put a squeeze on the batting positions that saw Peter Handscomb drop out.

Dropping two in-form players underlines both the reversal of Australia’s recent one-day form and the depth of talent the panel had to choose from. They have dropped two big names, Peter Handscomb and fast bowler Josh Hazlewood, from that list of final 15-man squad for the series.

“Steve Smith and David Warner come back into the squad. Both are world class players and it has been pleasing to see them produce some good form in the IPL,” Cricket Australia chairman of selectors Trevor Hohns said on Monday.

“Mitchell Starc and Jhye Richardson have both been named subject to fitness. The advice from the CA medical team is they are progressing well and barring any setbacks will be available for selection ahead of our opening match against Afghanistan on June 1,” he added.

Handscomb has done little wrong with the bat since winning a recall to the one-day side in January, but the returns of Smith and Warner meant the race for batting spots was always going to be tight.