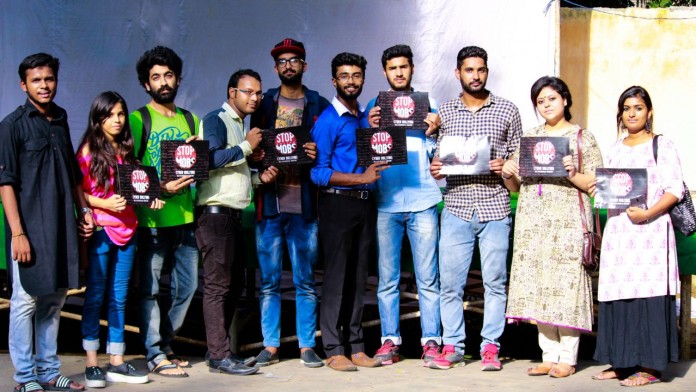 A National movement against cyber bullying, named StopOnlineMobs was organized at Jantar Mantar. It aimed at emphasizing, and condemning cyber bullying, specifically in the form of death threats, rape threats and physical violence instigated on the internet; directed at common people, mostly women. The movement focused on the present scenario of cyber bullying and spread social awareness about the issue as well as to tell the people about the laws that protect their rights online. This Initiative was led by Nitin Jose, a final year Journalism student at MBICEM, GGSIP University. More than 70 attendees witnessed a combination of Dance, theatrical performance, poetry, songs and intellectual speeches by the panellists.

“The internet has become a part and parcel of our life and its regulation is necessary to ensure the well being of its users. Students in large numbers are becoming a victim of cyber bullying but fail to file a complaint or take a major stand against the same. The wide spread of information about the laws related to cyber bullying should be introduced among the people so that they can use the law for their safety and dignity. We will form a trust as a platform for students who face cyber bullying and are unable to address the same,” said Sarvesh Kumar Tiwari, secretary of Nirbhaya trust and Managing Director, PR Professionals.

The #StopOnlineMobs, initiative was started on social media by the students and with their efforts, it became a national trend on Twitter.  Thousands of people joined by tweeting and re-tweeting about the movement.

The movement took its shape when a student of LSR, Simran keshwani presented her views on social media and in return started receiving rape threats, and vulgar comments. She is just one highlighted name in the list of victims of cyber bullying followed by numerous people.

The Core team was lead by Nitin Jose, who has an active social media presence and is an impactful public speaker as well as youth trainer. As a responsible citizen and an active member of the core team Pulkita Agarwal, Prateek, Joel Sakhi, Saneya Siddique, Aishwarya Nair, Udit Malik and Hiren Gokhani made their contribution to make this movement successful.

“Cyber bullying has become rampant on the internet, which is an open medium for communication as well as a weapon too. The use depends on the user and misuse is bound to be made accountable by the law! Therefore we decided to blend art and culture of India to condemn Cyber Bullying via this gathering of students” said Spokesperson and organizer  Nitin Jose.”

According to the recently-released Intel Security’s “Teens, Tweens and Technology Study 2015”, 81% of Indian respondents between eight and 16 are active on the social media networks. Of these, 22% have reported being bullied online — the highest in the four countries surveyed (Australia, USA and Singapore being the other three). That’s not all. As many as 52% of Indian children indicated that they had bullied people over the social media — again the highest of the four countries surveyed. A whopping 65% of respondents report witnessing cruel behaviour online

Along with the panellists, people from the audience also came up and expressed their views and experiences of cyber bullying faced by them. Tripti Oberai, Psychologist; passionately spoke on the need to curb cyber bullying and the present scenario of the same. “Cyber bullying scars the victim, psychologically to such an extent that suicidal tendencies and depression can become a prevalent part of their personalities”.

The citizens of India need to realize the implications of cyber bullying and the help that one can avail in case of a cyber attack. After all, a few words and a click can ruin a life