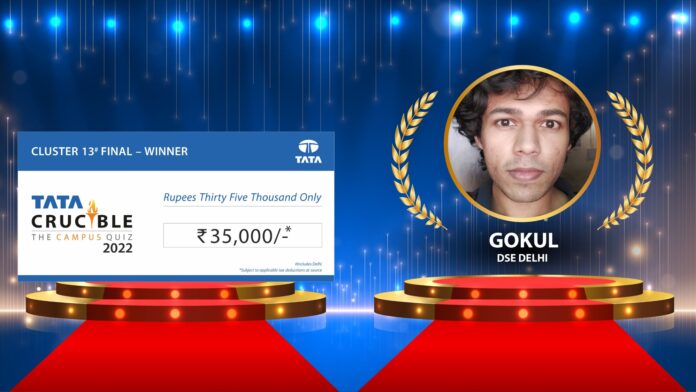 The Cluster 13, Finals representing the Delhi region, was a thrilling affair, with participants showcasing their quick thinking and sharp quizzing abilities.

The winner took home a cash prize of Rs. 35000/-* and will now compete in the Zonal Finals to qualify for the National Finals. Nikhil Joshi from Shri Ram College of Commerce, Delhi, was declared runner-up, winning a cash price of Rs.18,000/-*. Mr. Tanmoy Chakrabarty, Group Government Affairs Officer, Tata Sons Private Limited, Delhi was the chief guest at the event and gave away the prizes in a virtual prize distribution ceremony.

Stepping up to the challenges posed by the pandemic, Tata Crucible quiz evolved into an online format since 2020.

For the online version of the Campus Quiz, the country has been divided into 24 Clusters and after two levels of online prelims, top 12 finalists from each Cluster will be invited for Wild Card Finals out of which top 6 finalists will then compete in the 24 online Cluster Finals. These 24 Clusters are further grouped into four zones- south, east, west, and north and each zone will comprise of 6 Clusters.

Noted quizmaster ‘Pickbrain’ Giri Balasubramaniam known for his masterful, unique, and witty style is the host of the quiz.

The Co-sponsors for this edition are Tata Motors, Tata Play, Mia By Tanishq, Tata 1 mg and Tata CLiQ.