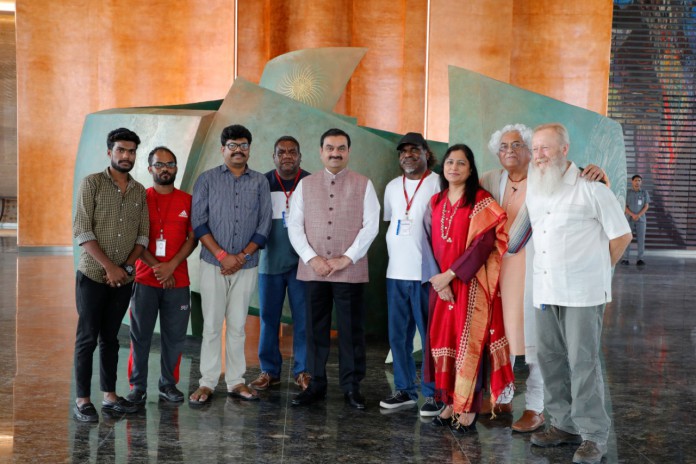 The Gonds from Madhya Pradesh and the Warlpiri people from Australia share a subconscious connection rooted in the nature that surrounds them. Their methods of art practice are connected despite the huge geographical gaps between them.

Focusing on the Gond tribes from Gondwana, India and the aboriginal Indigenous Community from Australia, who also refer to an ancient site with the same name, Mr. Rajeev Sethi set about discovering the connections between its original descendants. He travelled to the Northern Territory in Australia, visiting various settlements to learn about their way of life and memories. The beautiful and untamed terrain is home to numerous indigenous tribes including the Pitjantjatjara, the Arrernte, the Luritja, the Warlpiri further north, and the Yolngu.

After a tour to a few regions of Australia, under the able guidance of the eminent anthropologist Jenny Isaacs and art activist Peter Yates, artists from the Warlpiri community, represented by the artists Otto Jungarrayi Sims and Patrick Japangardi Williams, were invited to collaborate with the Gond artist BhajjuShyam. 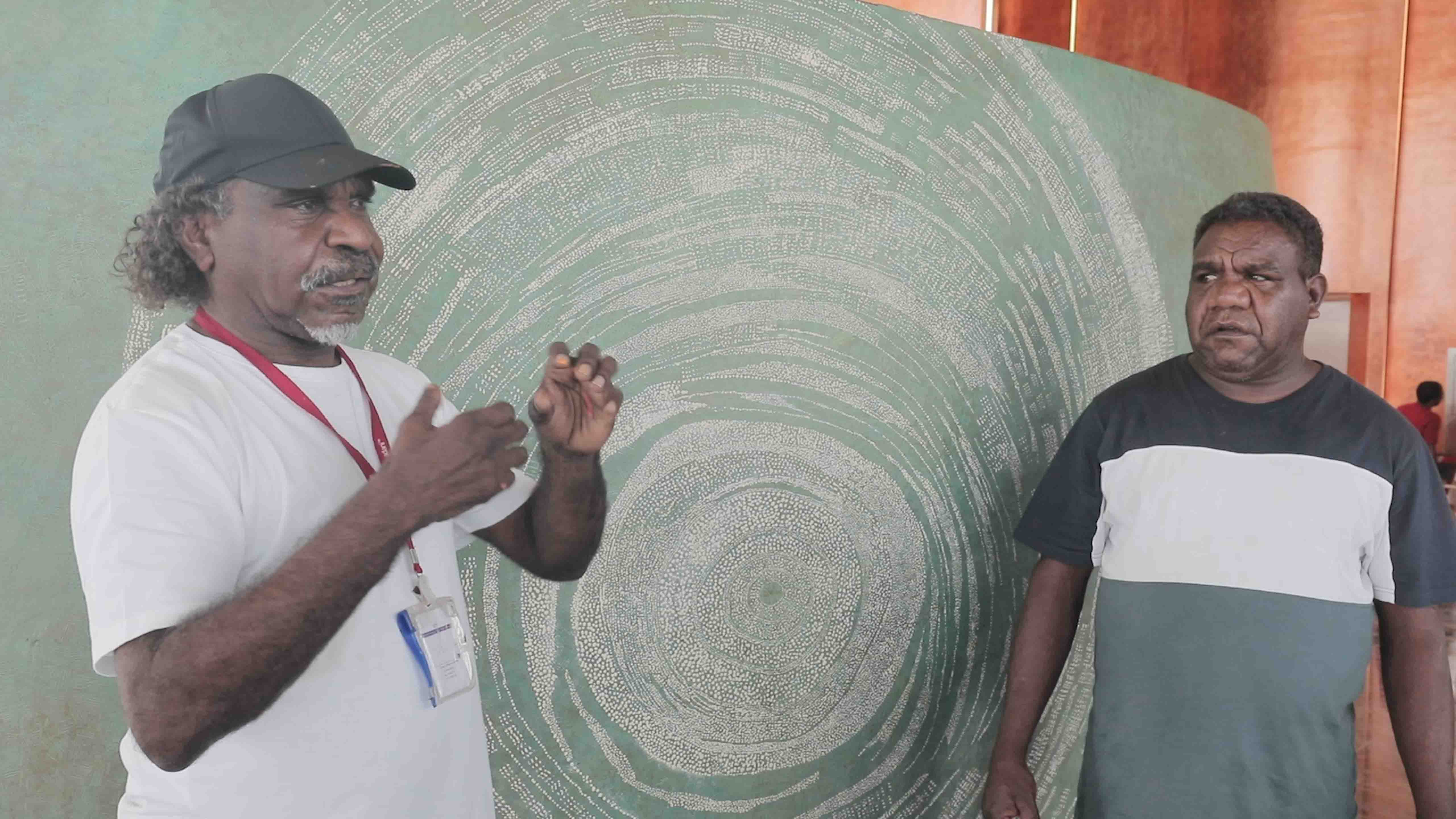 Collectively, they devised intimate signatures on Mr. Sethi’s sculpture evoking a kinetic spiral that coils and uncoils on itself.

The Gonds and their art may well be connected to Bhimbetka, the Mesolithic rock-art site that boasts of human settlement 100,000 years ago. The Aboriginal art is inspired by the sacred landscape of the indigenous people and reinforces the mythical accounts of ancestors travelling from site to site, exploring natural beliefs and curiosities.

Gond and Aboriginal art share inspiration from their own stories about creation, bringing them to life through dashes and dots. For the Aborigines, the dots refer to dreaming and territory. For the Gonds, they represent spiritual communion with the natural world. The dots represent an ancestral, poetic vision of the atom, as the Gondi shaman in his trance becomes a microcosm of the world.

Patrick and Otto derive their inspiration from the land that surrounds their native place Yuendumu in the Northern Territory. They paint for the Warlukurlangu Artists Aboriginal Corporation an aboriginal, government owned art centre in Yuendumu. The stories about the water wells, footprints of women dancing, under the Milky Way and whirling galaxies, the first stirrings of creatures found in the collective memory of the Warlpiri tribe are preserved through oral history and rituals.

BhajjuShyam began his art practice in a family of village priests ‘Pradhaans’ and later moved to Bharat Bhavan in Bhopal. He is now a Padmashri and an important exponent of the innovation in Gond-Pardhaan tradition, spearheaded by his late uncle, Jangarh Singh Shyam. Bhajju grew up in farmer’s family in the forests of Madhya Pradesh. The Gond tribe has a tradition of painting the house walls during celebrations and weddings, which now evolved into painting on canvas. The practice is informed by a deep appreciation of nature, where flora and fauna become metaphors for life. Gond legends, especially the creation myth, place great importance on the tree, the crow, the bees and the earthworm. Bhajju now uses these metaphors to make sense of the modern world, best seen in his many acclaimed books.

Speaking about the Gondwana Art, Mr. Gautam Adani, Chairman Adani Group, said, “History is fascinating but I did not expect to learn so much about Gondwana, the 550-Mn-years-old supercontinent through stories curated by Australian Aboriginal and Indian Gond artists. The cultural exchange also reflects upon the historic bond between the two nations”.

’Gondwana’ at its inception was an experiment in understanding creative collaboration with cross-cultural insights. The Gonds from Madhya Pradesh and the Warlpiri people from Australia share a subconscious connection rooted in the nature that surrounds them. Their methods of art practice are connected despite the huge geographical gaps between them. Their methods of speech may differ, but they share stories through their art and song.

‘Gondwana’ is the Adani group’s first tribute to innovation in confluence if two art inspired countries. It will continue to manifest in different incarnations sparking ongoing multilogues across oceans and eras.

About Art Programme at Adani Shantigram

Shantigram’s unprecedented Art Programme located at the Adani headquarters in Ahmedabad aspires to accelerate the Adani Group’s global presence and reposition its growth trajectory. The expanse of the Group’s footprint facilitates reimagining corporate engagement and outreach with creative communities. Definitive and extensive trans-disciplinary interventions as artworks have been specially commissioned. They manifest international branding while celebrating India’s legacy of cultural talent. The principal objective of the artwork programme is to ensure the future of traditional craft skills with design-led interface. The scenographers have involved new media artists, architects, engineers and artisans to create 48 installations.