Human like cyborg eye could power itself using sunlight

Human like cyborg eye could power itself using sunlight. A human-like artificial eye capable of being powered by sunlight could eventually be used as a visual aid for people who cannot see. Zhiyong Fan at the Hong Kong University of Science and Technology and his colleagues have developed a spherical visual sensor that mimics the structure of the human eye.

Like the real thing, the artificial eye contains a lens to focus light and a hemispherical retina, the region at the back of the eye where photosensitive cells generate electrical impulses to be sent to the brain.

The artificial eye is 2 centimetres in diameter, with its hollow centre filled with a conductive fluid. An adult human eye is a similar size and is filled with a clear gel called vitreous humour. The artificial retina is made from porous aluminium oxide filled with densely packed nanowires. These wires are light-sensitive and made from a compound called perovskite, which is commonly used in solar cells. They act in a similar way to nerve cells in the human eye, transmitting electrical signals when they are activated by light.

The team projected images of letters onto the artificial lens to test how well it worked. A computer hooked up to the eye successfully recognised the letters E, I and Y. The team says it could, in theory, be connected to an optic nerve to do the same, to test whether the device was medically safe.

The current version of the eye requires an external power source, but the team plans to make it self-sufficient in future. “Each nanowire can function as a small solar cell,” says Fan. “In that case, we don’t need any external power at all.”

Another limitation is the eye’s low image resolution compared with commercial sensors such as those in smartphones. On the other hand, existing visual prosthetic devices use a flat object for image sensing, which doesn’t conform to the human eye’s spherical shape, says Fan. As a result, this limits the possible field of view compared with a human eye, which normally has a field of vision of around 150 degrees. 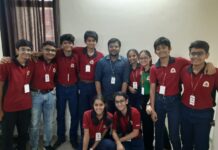