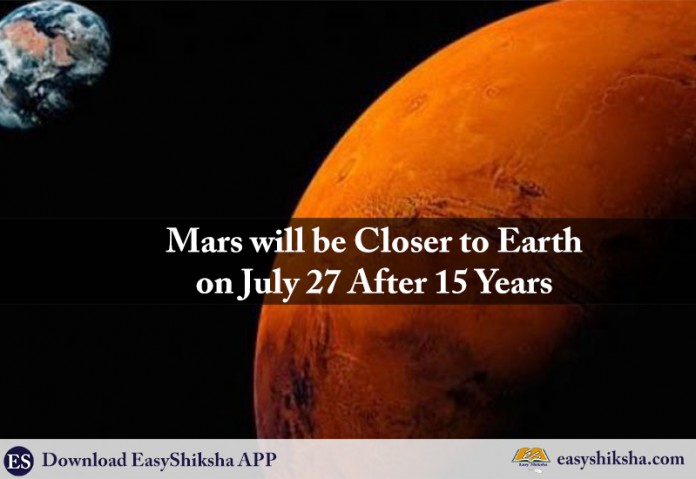 After 15 years, Mars will make another close appearance to the earth. This appearance will take place this week and it will look brighter than in last 15 years. But also be aware of the hoax, spreading around the social media and internet that ‘Mars will be as big as Moon’. If that thing ever happen we all will be in big trouble. The gravitation of the Mars and Earth will interfere each other. We might experience some gravitational pull.

The Red Planet will be 57.6 million km away from the Earth on July 27 in a celestial event called Opposition — when the sun, Earth and any planet, in this case, Mars, align in a straight line. In 2003, Mars had come close to our planet and that was an event in which the Red Planet was that close after 60,000 years.

According to NASA, a Mars opposition occurs every 26 months, but every 15 to 17 years the opposition occurs near Mars’ perihelion—the point when the planet’s orbit is closest to the sun, making it even brighter in the sky when viewed from Earth.

However, it will have to compete with the moon for stargazers’ attention, because July 27 will also feature a total lunar eclipse that will last for a remarkable 103 minutes—making it the longest total lunar eclipse of the 21st century. However, the eclipse will only be visible in parts of Australia, Asia, Africa, Europe, and South America (though a full moon will join the brightly shining Mars in the sky for the rest of the world, and Saturn will be visible as well). A total lunar eclipse occurs when the moon passes through Earth’s shadow, at which point it takes on a reddish tint, giving it the nickname “blood moon.”