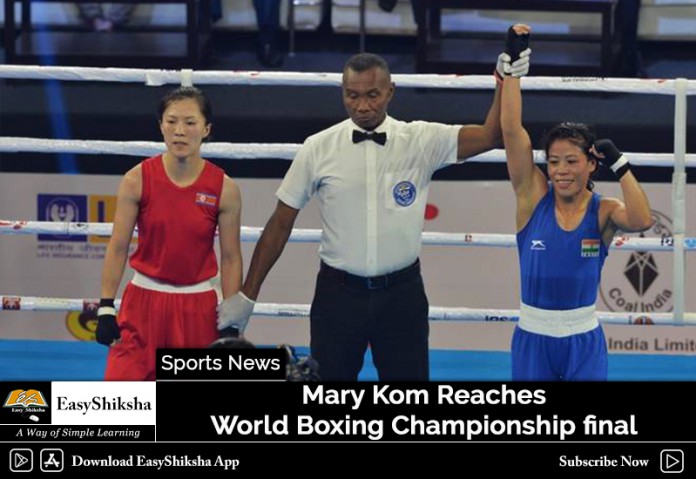 The legendary M C Mary Kom stayed on track for an unprecedented sixth gold medal by hitting the 48kg closing but Lovlina Borgohain had to pay for a bronze after losing her semifinal bout in 69kg from the Women’s World Boxing Championship here Thursday.

The 35-year-old Mary Kom, a five-time world champion, beat her North Korean opponent Mi Hyang Kim at a unanimous 5-0 decision in the semifinals.

“I had defeated her in the closing of last Asian Championship in Vietnam, so I had been a small alert. That time I’d beaten her in a one-piece game. Every boxer learns something, whether we win or lose we all analyze regarding our weaknesses & strengths, about defense & assaulting,” explained Mary Kom after her victory on Kim.

With this victory, Mary Kom has maintained her dream of winning an unprecedented 6th world championship gold medal living. Mary Kom is tied with Katie Taylor of Ireland on five gold in the World Championships. The 35-year-old Manipuri, a mother of three, won a silver at the first variant and then went on to win five gold at consecutive World Championships from 2002 to 2010.

She won a bronze medal at the 2012 London Olympics when women’s boxing made its debut at the sporting extravaganza.

Cheered on by a partisan crowd at the KD Jadhav Stadium in New Delhi, Mary Kom was her usual best as she exhibited great technical acumen to outdo her opponent.

Mary had previously won six medals at the World Boxing Championships that includes six golds (2002, 2005, 2006, 2008, 2010) and one silver (2001). Mary is now assured of a least a silver after her semifinal triumph, hence going before Irish boxing legend Katie Taylor (five golds and a bronze) on the number of medals won. Mary Kom will fight Hanna Okhota of Ukraine, who defeated Madoka Wada of Japan in her semifinal bout, to get a place in history. The summit clash is going to be on Saturday, 24 November. “I’ve beaten her in Poland. I am able to see that bout and plan the strategy. I hope to beat her again,” Mar Kom explained.