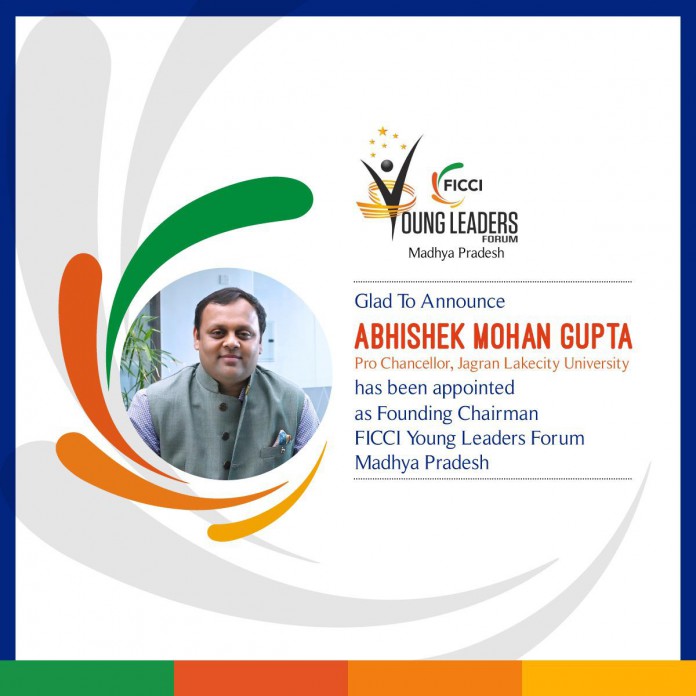 He is currently the Pro-Chancellor of Jagran Lakecity University, Bhopal

New Delhi, 23rd Oct 2020: FICCI, the largest and oldest apex business organization in India has appointed Mr. Abhsihek Mohan Gupta as the Chairman of FICCI Young Leaders Forum in Madhya Pradesh. Mr. Gupta shall be the founding Chairman of the FICCI Young Leaders Forum in Madhya Pradesh. He is currently the Pro-Chancellor of Jagran Lakecity University, Bhopal, and also serves as the Joint Secretary, Jagran Social Welfare Society.

FICCI Young Leaders is a forum that provides a voice to the young, budding leaders of the nation across sectors to share their innovative ideas for the overall growth of the economy. This could be achieved by recognizing the contribution of young India in various sectors/fields and understanding the key challenges faced by the first- and second-generation entrepreneurs

Mr. Abhishek Mohan Gupta has been leading central India’s number 1 university Jagran Lakecity University as a pro Chancellor & promoter and also sits on the apex board of Jagran Social Welfare Society, the promoting body of Jagran Lakecity University, Delhi Public Schools, Bhopal, Kolar, Rau, and Indore as well as a promoter of Shiksha Kendra, the schools for the underprivileged. A management post graduate from Australia and the U.K, he has led the creation of the World Economic Forum’s Global Shapers Chapter of Bhopal as well as holds a key marketing & communication leadership role with EO Bhopal Chapter.

As an edupreneur, he is known for his ability to make big bets on education, new technology, and new careers; Mr. Abhishek Mohan Gupta has been driving JLU’s strong positioning in the emerging higher education ecosystem with a wide array of innovations and influence.

Jagran Lakecity University Bhopal is a private university established under Section 2(f) of UGC Act 1956 and is based out of Bhopal, Madhya Pradesh. JLU Bhopal is one of the fastest growing and one of the most awarded university of Central India having practice based pedagogy at its core. Currently the university is offering 56 degree program to more than 2500 students from 8 countries and 27 states of India. The university has 27 partnership with top industries and international universities ensuring the students get great exposure both nationally and internationally. JLU Bhopal is the only participating university from Central India ERASMUS+ programme under the Tuning India Project, funded by the European Commission and is also currently the country chair for Association of Universities of Asia Pacific (AUAP). The University has been bestowed with several prestigious awards, such as ‘University of the Year’ by Government of Madhya Pradesh for consecutive four years in 2015, 2016 2017 and 2018 and is recognized as a Global League Institution in 2015 at the House of Commons, London, UK. JLU Bhopal has been ranked “No. 1 Private University in Madhya Pradesh” in the year 2016, 2017, 2018 & 2019 by several leading publications