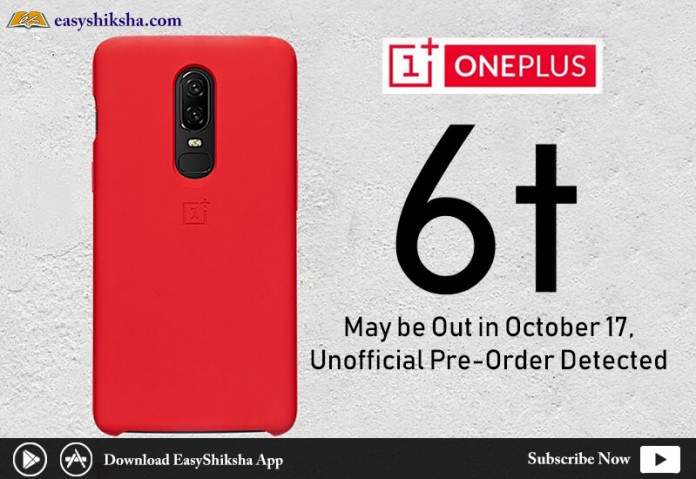 As the rumors are spreading there is many images, specification (nearly similar) are floating on the internet. While so many news and leaks around us there is another one that says, OnePlus 6T might launch on October 17. Also these is a website that is showing OnePlus 6T with full specification and images on Pre-Order.

The OnePlus 6T’s listing, which is still live on the Giztop website, states that the device is currently out of stock and will only be available after October 16th. The date mentioned on the website falls in line with previous leaks, which claimed that the next OnePlus offering will be unveiled in October.

OnePlus has also posted a teaser on Twitter hinting at the new in-screen fingerprint technology.

OnePlus 6T looks like a rebranded Oppo R17 Pro which launched in China earlier this year. The new OnePlus phone is expected to come with waterdrop notch, which is much tinier than the current notch on OnePlus 6. Vivo recently launched V11 Pro with the waterdrop notch that covers just the front-camera module.

While little is known about the OnePlus 6T specifications, rumours hovering around the smartphone suggest that it will accommodate triple camera setup. A supposed retail box of the OnePlus 6T that recently appeared on the Internet revealed that the phone will feature a waterdrop style notch display. The leaked retail box showcased “Unlock the speed” which is believed to be the tagline of the new OnePlus smartphone.

Reports heavily speculate that OnePlus 6T might adopt the design from Oppo’s recently launched handset, the Oppo R17. OnePlus has confirmed that the new flagship smartphone will feature a fingerprint sensor embedded underneath the display. According to CNET report, OnePlus 6T will be “slightly thicker” by 0.45mm as compared to OnePlus 6 due to the new feature. OnePlus had to re-arrange the “internal hardware” to embed the in-display fingerprint sensor, as per the report. Rumours further indicate that the upcoming OnePlus 6T could feature a 6.4-inch AMOLED display and likely be compliant with 5G network.