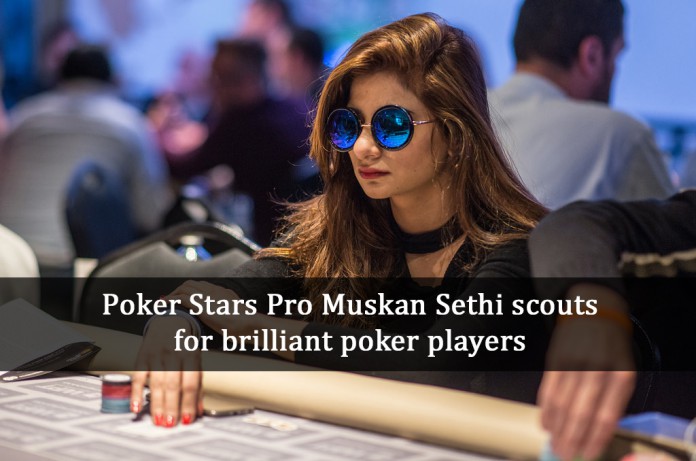 New Delhi, 18 July 2018–PokerStars India, operated by Sachiko Gaming Pvt. Ltd. ambassador Muskan Sethi is scouting for the best poker brains in India to compete in her team – Delhi Diehards as part of Global Poker League(GPL) India, the country’s first long-run poker league. Muskan’s qualifiers has begun already and to be considered for her team, all the players have to do is to participate in one of the free rolls that run daily on Pokerstars.IN until July 22. There are other weekly qualifiers that will run for the next three weeks until August 5, to find team members for the other regions.

Muskan was recently in Las Vegas taking part in the World Series of Poker (WSOP) where she played the Main Event, the biggest poker tournament in the world. Muskan also participated in the Ladies International Poker Series (LIPS) National Championship 2018. The players that qualify for her team will be in safe hands and will be sure to benefit from her skill and experience when it comes to the mentoring stage of the GPL India.

Commenting on the league, Muskan Sethi, PokerStars Pro said, “It is so exciting that a poker tournament like this is happening in India. It is not only to promote this game of skill but also to give poker enthusiasts and aficionados a chance to play and have a chance to win a coveted Platinum Pass to the Bahamas in January! I’d recommend everyone to check out GPL India’s qualifier’s schedule today and pre-register for the qualifier’s run for Delhi Diehards. This is one of only a few ways that players from India can win the chance to compete on the world stage at the PSPC in Bahamas, January 2019.”

The players have already been selected for Kolkata Creators, Pune Alphas and Chennai Sharks. Three more ‘Round 1’ MTT (multi-table tournament) satellites will run on Pokerstars.IN, starting each Monday. The top ten finishers in each round will qualify for the week’s Team Final. After the online qualification period, the top 10 finishers in each Team Final – 60 hopefuls in total – will then go on to participate in the GPL India Bootcamp, to be held on September 8, 2018 in Delhi.

All six team rosters will be confirmed before 9 September. From there teams will compete for the Season One Championship and the chance to win the hottest poker tickets in town, five Platinum Passes – worth a total of Rs. 20 lac Platinum – Rs. 1 crore to play in the PSPC, in the Bahamas in January 2019.

The 60 GPL India Bootcamp hopefuls will undergo quickfire interviews to explain why they should join their respective teams as finalists. The judging panel for this interview will be a mixture of PokerStars India pro’s, GPL India managers and local celebrities. The finalists will then be randomly assigned to play in a Sit-and-Go with each table representing a regional GPL team. Each player’s starting stack will depend on how they scored in the panel interview, with the lowest starting stack being 1k and the largest 5k.

The PokerStars.IN online poker room and website is operated by Sachiko Gaming Pvt Ltd, an online skill game provider which is a part of Sugal&Damani Group. Sugal&Damani Group is a leading business house primarily dealing with lottery and gaming businesses and is the largest state government lottery operator in India. It is also one of the major players operating another game of skill, rummy, under the brand name khelplayrummy.com. Apart from lotteries and gaming, Sugal&Damani Group also has interests in information technology, e-commerce, payment services and real estate.