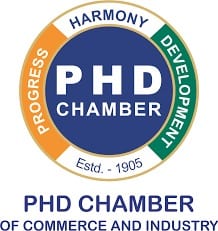 On the RBI’s response to inflation, Dr Pronab Sen, Programme Director, India, Programme, International Growth Centre (IGC) and Former Chairman, National Statistical Commission, said that the RBI waited too long to act on inflation and must have acted around November 2021. He opined that RBI has now been forced into a situation to overact in terms of policy rate increase. This will increase the cost of funds, especially for MSMEs, who are trying to come back into the market after the impact of COVID-19 over the last two and a half years.

Dr Pronab Sen was speaking as the Chief Guest at the “Open House Discussion on Impact of Inflation on Economy, Businesses and People” recently organised by PHD Chamber of Commerce and Industry .

Dr Pronab Sen highlighted that inflation is a process which feeds on itself and continues until an external force is applied to slow it down. He states that the global commodity prices are high but they have been high since the covid-19 struck and have not changed much since then. Even then, inflation has accelerated across the world.

He said that over the years, corporate India has captured a huge amount of market share as compared to the MSMEs. This situation has caused the movement of price power in the hands of large corporates, which are continuously passing down the cost increase to consumers.

Guest of Honour, Shri Subhash Chandra Garg, Ex-IAS, Author of Book- The $10 Trillion Dream and Former Finance & Economic Affairs Secretary, Government of India, said that CPI has tended to underrate inflation problem in economy. He opined that both the policy makers (Government and RBI) have not acted on the base of high WPI, which has been increasing since the last 13-14 months.

He opined that inflation has been the result of mismatches in global demand and supply. The stimulus provided by various countries amid COVID-19 provided a big boost to the demand, while the supply remained disrupted, thereby creating inflation problem. He highlighted that the impact of high inflation has been borne by households and MSMEs.

He added that though the RBI has increased the interest rate to deal with the inflation, however, this will not have much effect to decrease the liquidity supply in the economy.

Inflation is expected to start softening by July 2022 on the back of diminishing unfavourable base effect particularly in food articles and liquidity drain as RBI has increased the repo rate by a significant 90bps recently (40bps in May 2022 and 50bps in June 2022), said the Industry Body PHD Chamber of Commerce and Industry in a press statement issued here today.

Monetary tightening will have an impact on consumption demand and resultant price corrections in the various goods and services in both consumption and whole sale segments, said the Industry Body.

Also, increase in interest rates by advanced economies will have an impact on international commodity prices as the cost of inventory carried by speculators will go up and there will be significant price corrections, said the Industry Body.

It is the second-rate hike since 2018 as persistent inflation pressures are becoming more acute, said the Industry Body.

Increase in loan EMIs would impact the consumption sentiments and reduce demand in the economy which would lead to corrections in wholesale prices, said the Industry Body.

PHDCCI study stated that the annual CPI inflation rate in India accelerated for the continuous 7th month to 7.8% in April 2022. Food and Beverages inflation increased to 8.1% in April 2022, the highest reading since November 2020, with cost of oils and fats, meat and fish, and vegetables recording the biggest rises. Other upward pressure came from prices of fuel and light, clothing and footwear, housing and pan and tobacco.

Going ahead, in case of CPI, the statistical effect will also start diminishing from the month of October-November 2022 and inflation will continuously soften towards the normal range of RBI upper band, said the Industry Body.

PHD Chamber suggests a 5 prong strategy to soften the inflation

2.       Strengthening of the global value chains and shifting of the sources of the imports from higher price to low price countries.

3.       Import substitution for the technology intensive and labour-intensive products where India has a high imports category and comprises higher import shares.

4.       Enhancing indigenous production possibilities where there is high demand for the commodities.

5.       Measures for preventing hoarding of the essential commodities to stop price accelerations