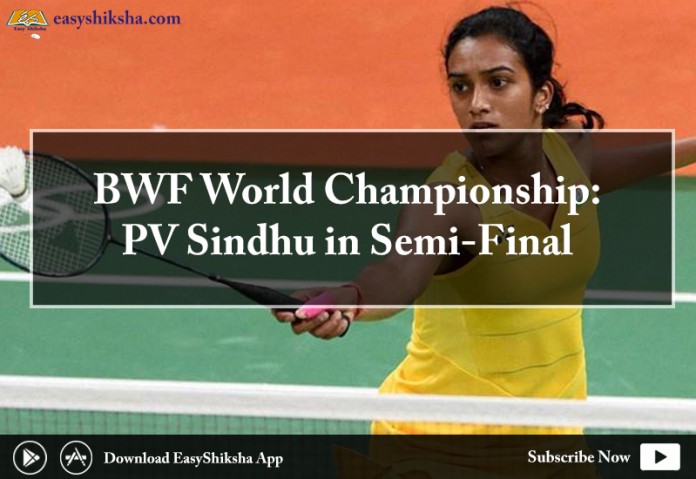 Star Indian shuttler PV Sindhu beat Nozomi Okuhara of Japan in straight games to cruise into the semifinals and assure herself of a medal in the World Championships here yesterday. Sindhu defeated Okuhara 21-17 21-19 in a 58-minute quarterfinal match to set up a semi-final clash against World No. 2 and another Japanese Akane Yamaguchi today. The World No. 3 Indian produced a dominant display against her World No. 6 rival as she avenged her defeat in the last edition summit clash.

Incredible news coming in from Nanjing!🏸🇮🇳💪👏

World No3 @Pvsindhu1 storms into her second consecutive semi final of the World Championship.The Olympic Medalist beat @nozomi_o11 21-17; 21-19 in the quarters; will face off with 🇯🇵Akane Yamaguchi in the semis.#IndiaontheRisepic.twitter.com/7yw1GMqTeD

Earlier in the day, Saina, the 10th seed, was outclassed by Spanish seventh seed and two-time world champion Carolina Marin, who cruised to a 21-6, 21-11 victory in 31 minutes to move into the last four round. Sindhu defeated Okuhara 21-17 21-19 in a 58-minute quarterfinal match to set up a semi-final.

The win was Spaniard Carolina’s fifth in 10 meetings against the veteran Indian, a two-time medallist at the World Championships. On Saturday, Carolina will meet China’s sixth seed He Bingjiao, who eliminated top seed Tai Tzu Ying of Chinese Taipei with a 21-18, 7-21, 21-13 win.