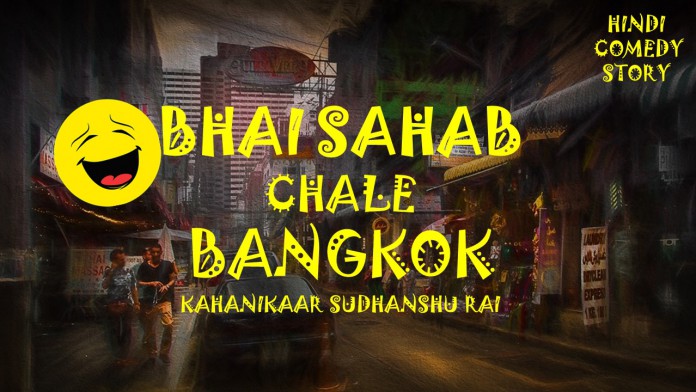 It is a popular belief that if you ask any bachelor about his dream foreign destination, there’s maximum probability that the answer would be Bangkok. But contrary to this, fact remains that it’s not just bachelors who long to visit the Thai capital, which has earned the reputation of being a paradise for those seeking fun and frolic during an international outing. And it becomes even more interesting when the one visiting Bangkok is a middle class Indian and on his first visit to a foreign land.

Such is the case with ‘Bhai Sahab’, the protagonist of Kahanikaar Sudhanshu Rai’s hilarious Hindi short story – ‘Bhai Sahab Chale Bangkok’. Being a simple teacher from Lucknow in Uttar Pradesh, it was a dream come true for him when father of one of his students gifted him a return ticket to Pattaya and Bangkok. The news of Bhai Sahab’s scheduled visit to Thailand spread in the vicinity like a wildfire and soon became the talk of the town. But the changed looks and responses from the neighbours was something that kept him bewildered. Unfazed by it, Bhai Sahab chose to brush them aside as jealousy due to the opportunity showered upon him.

The real fun begins when the narrator of the story, Dabloo, met Bhai Sahab outside the airport in Bangkok when he was indulged in an argument with cops. And thus began the roller-coaster joyride of Bhai Sahab along with Dabloo, Mantu, Vicky and Chintu. The journey was full of hilarious moments, triggered mostly by the innocence of the protagonist. One thing that kept bothering Bhai Sahab throughout the trip was the expenditure. Miser that he was, he even refrained from going inside a temple citing the entry fee. But towards the end of the story, the miser turned out be a man with a golden heart.

Today when we can’t even venture out of our doorstep, the story by Kahanikaar Sudhanshu Rai not just tickles our funny bone but also takes us through the foreign land and creates the imagery of the streets of Bangkok. The first journey of Bhai Sahab in the land outside motherland and from being a miser to one with a golden heart can be experienced when one listens to the tale.