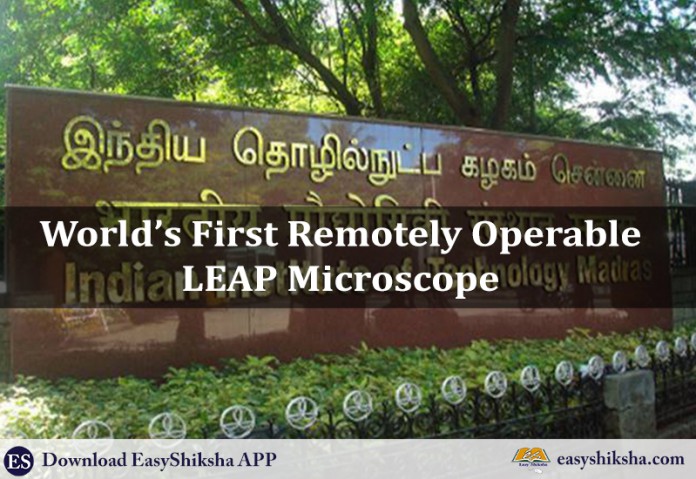 IIT Madras have reviled LEAP (Local Electrode Atom Probe) Microscope to get precise view of an atom in a material. This is claimed to be world’s first of its kind. The costing of this Microscope is said to be Rs 40 Crore. ‘This microscope is under the development exercise by 8 top research institutes in our country. They are led by IIT-Madras’. This statement came from institute.

Though there were several such devices available across world, the LEAP inaugurated at IIT-Madras was the first one that can be operated through a special terminal by researchers divided geographically, it said. “This is the first time eight top research institutions in the country have collaborated to establish such a platform at a cost of nearly Rs 40 crore, spearheaded by IIT Madras,” the statement said.

IITs of Bombay, Delhi, Kanpur, Kharagpur and Ropar along with International Advanced Research Centre for Powder Metallurgy and New Materials (ARCI) are the partner institutions who contributed Rs 2 crore each for the project. Besides, the Board of Research in Nuclear Sciences (BRNS) had contributed Rs 3 crore.

The Board of Research in Nuclear Sciences and Department of Science and Technology contributed the remaining amount. Dr Thomas F. Kelly, Inventor of Local Electrode Atom Probe (LEAP) and the guest of honour, spoke about the importance of this technology.

The modern LEAP instrument, by the virtue of having Laser pulsing methods, enables investigation of a wide range of materials from metals, ceramics to semiconductors and even insulators with a very high acquisition rate of 5 Million ions per hour. Dr Thomas F. Kelly, Inventor of Local Electrode Atom Probe (LEAP) and the guest of honour, spoke about the importance of this technology.

HRD announced 6 ‘Institute of Eminence’ having Two IIT and JIO