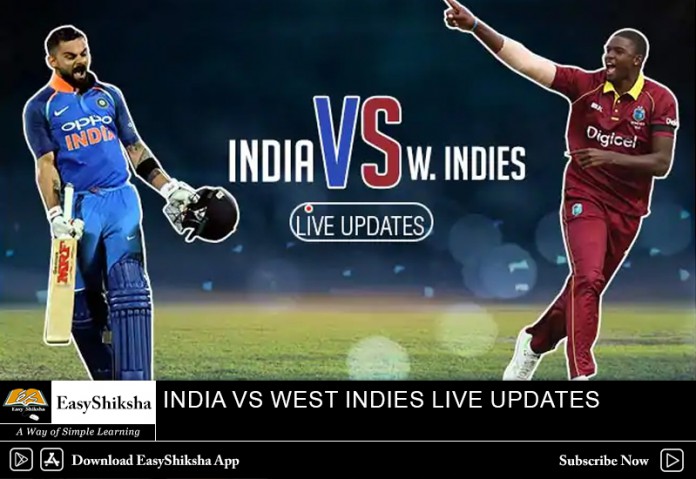 Match of India vs West Indies is going to held in Old Trafford on Thursday. As India is so much determined to be unbeaten in this continuous World Cup 2019 series. Now a days on social media there is trending slogan for Indian team is “Bleed Blue”.

So this kind of headline is so much important for the Indians to get all knowledge about . The match of India vs West Indies is going take place on Thursday.

After coming out of these strenghful performances of blue team they were ready to achieve fourth victory, but it was really hard to overcome that against Afghanistan.

Last Saturday , in Southampton riding on Mohammad Shami’s hat-trick, India successfully defended a below par total at a sluggish Rose Bowl wicket.Shami saved and retain his place with his labourious skills against Windies but unlikely India was in danger and finds it risky to let play Bhuvneshwar Kumar , who was sidelined due to a hamstring injured case. They will need to come out with a complete performance if they have to beat an inform Indian team and keep themselves alive in the competition.

With nine points from five games, India are comfortably positioned in the top four and require two wins out of the remaining four games to book their place in the semi-finals. Virat Kohli would want M.S. Dhoni, Kedar Jadhav and Vijay Shankar to get into the proper form and perform against the attacking bowling line-up of the Windies that seems to little bit of tricky and scratchy against our Indian warrior Afghanistan.

Our blue captain was full of contentment after that match as India has victory in its hand.

And now West Indies needs to get victory in how any condition to get a place for them in semi-finals . As it had been a long time in the way of dramatic series for West Indies to get a success . In the match with 2015 runner up Newzealand, the country which lose by five wicket loss was West Indies.

Carlos Brathwaite’s remarkable century and dismissal – caught on the boundary – trying to hit a six for victory has boosted confidence within a West Indies team that promised so much but has only one victory so far.

India vs West Indies | We Are Performing Well as a Team and as Individuals: Bhuvneshwar

Bhuvneshwar, who has five wickets so far in the World Cup in three games, feels the Indian team is performing well both as a unit and as individuals.“The World Cup is going good for India so far. We are unbeaten so far and have won couple of good games over Australia and South Africa. We are performing as a team and individuals as well,” Bhuvneshwar told the ICC. Bhuvneshwar, who has 123 wickets in 108 ODIs till date, feels it’s important to bowl a fuller length in England although the white ball is not swinging around that much.