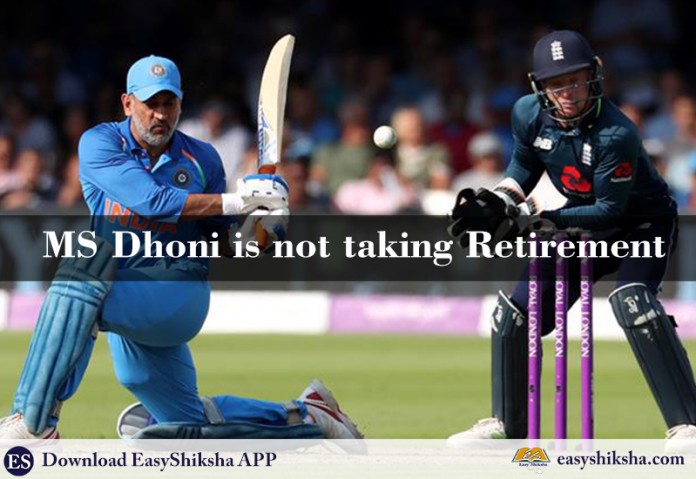 In the end of third ODI match MS Dhoni took the ball from the umpire and all of the sudden social media start talking over it. On the basis of this incident, a rumor was spread about Dhoni taking retirement. This fake news made his fan sad and haters become happy. Soon social media get flooded with lots of memes. But Indian Cricket team coach break his silence and said “It is all rubbish, MS Dhoni is not retiring.”

Dhoni asked for the ball from umpires Bruce Oxenford (Australia) and Michael Gough (England) as the teams walked back towards the pavilion. India lost the third ODI by 8-wickets and with that the series 2-1 for first bilateral series lost since 2016.

Shastri dismissed all speculation on Dhoni’s retirement on Wednesday. “MS wanted to show the ball to Bharat Arun. He wanted to show him the wear and tear the ball had endured, to get a general idea of what the conditions were like,” Shastri clarified to Times of India.

Speculation about Dhoni’s playing future has intensified in recent years as he draws closer to the end of his career; cricket.com.au reporter Sam Ferris was famously called onto the stage next to Dhoni at the 2016 World T20 after he asked the Indian if it would be his last major tournament. The former India skipper achieved the milestone during second ODI against England at Lord’s. Dhoni has joined the likes of Sachin Tendulkar,

Recently, Dhoni added another feather to his illustrious cap as he became fourth Indian and 12th overall in ODI history to score 10,000 runs. The former India skipper achieved the milestone during second ODI against England at Lord’s. Dhoni has joined the likes of Sachin Tendulkar, Rahul Dravid, Sourav Ganguly, Kumar Sangakkara, Brian Lara and Sanath Jayasuriya on the elite list.