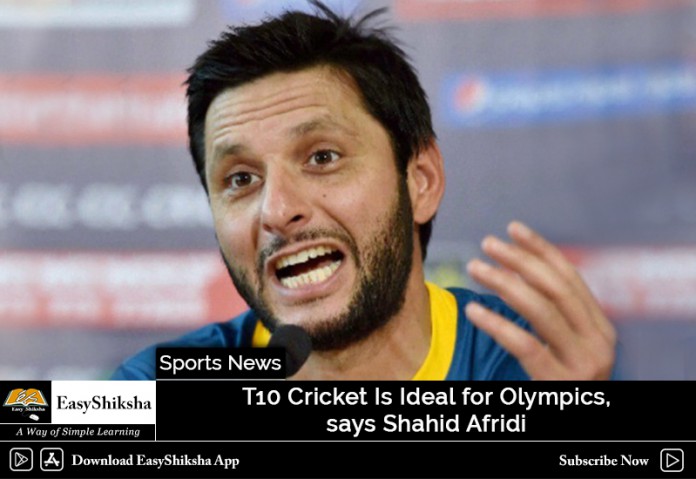 Former Pakistan all-rounder Shahid Afridi has vouched to the recently introduced T10 League to be the ticket for cricket to the Olympics. The swashbuckling all-rounder, who now represents team Pakhtoon in the T10 League, that is currently being played at the United Arab Emirates (UAE), believes the shortest arrangement of this game has amazed fans with its quickfire style of play and also the standard of the cricket at the league has also improved tremendously compared to its inaugural season.

The International Cricket Council (ICC) had recently made a bid to add women’s T20 cricket at the 2022 Commonwealth Games, that will be scheduled to be held in England, and also the cricket council is also pushing aggressively for the addition of the sport of cricket at the Olympics in the not too distant future. Meanwhile, the Shahid Afridi has stated T10 is the best case to show the world what cricket is all about as it’s an overall test for bowlers and batsmen.

Afridi is currently playing for the Pakhtoons at the T10 Cricket League at the UAE. The all-rounder, who played 398 ODIs for Pakistan within his 22-year global profession, said that this is the ideal method to reveal “the world what cricket is all about.” “I feel this is the best format to present cricket and we are all enjoying it, which is the major thing,” he said.

It is an opinion that he shares with present England ODI and T20I captain Eoin Morgan. “I think T10 could be something that you could potentially propose into an Olympic committee,” Morgan had said throughout the very first edition of this T10 League. “When you examine the T20 match, it goes on for just a little bit more, so if you are talking about playing a role in the Olympics then you would probably have ten teams or more and that would likely last five or six weeks. But a ten-over league could be carried out in about eight days that might be proper.”

Cricket hasn’t been at the Olympics since 1900. The ICC had bid to get a women’s cricket event in 2022 Birmingham Commonwealth Games.