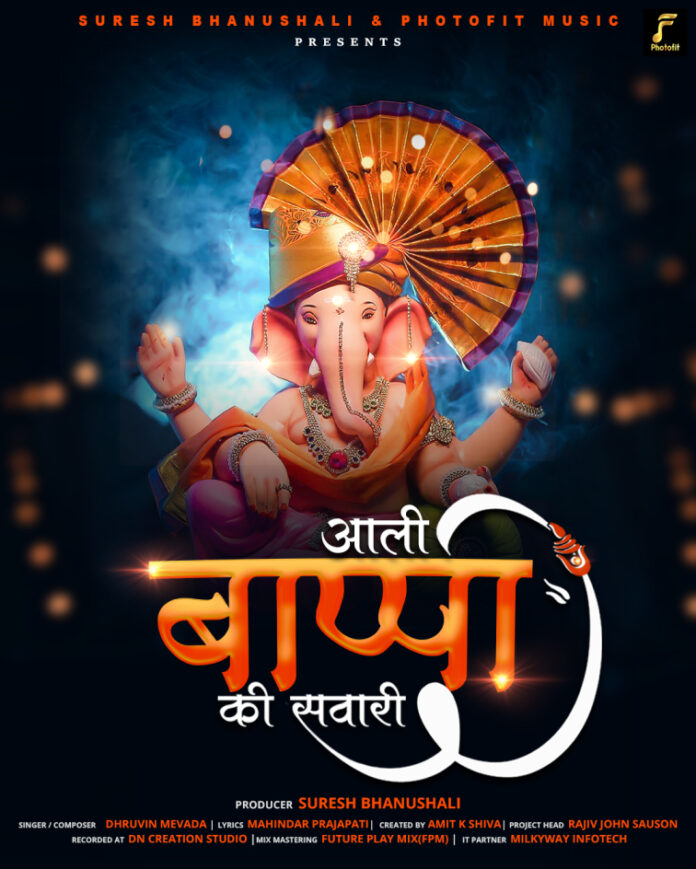 Since the festival of excitement “GANESH CHATURTHI” is here, people have their emotions connected to this Utsav. To describe the ambiance the streets come alive with the glow of lights and the passion of devotees. The festival is combined with both high-beat energy and emotional attachment of the people. This new melody released by Photofit Music “Aali Bappa Ki Sawari” shows the high pitch of Ganesh Chaturthi.

The song  “Aali Bappa Ki Sawari” adds to the festive spirit, as we celebrate the most awaited Utsav, Ganesh Chaturthi sung by Dhruvin Mevada and soulfully penned by Mahindar. The song was produced by Suresh Bhanushali and Photofit Music, where they deployed their reliable resources and high determination for the best output.

In the intensity of this Ganesh Utsav, the music video of “Aali Bappa Ki Sawari” by Photofit Music is flawless and conceptualized by the most glorious and skilled Amit K Shiva, Photofit Music.

“Aali Bappa Ki Sawari” will stand out in taking a competitive edge in gaining fans’ attention with the GRAND AGMAAN of Bappa, along with the other surreal projects by Photofit Music Company. This strategically planned structure of the song came to life with commendable backing by Rajiv John Sauson’s photofit music.

Further Mr. Rajiv John Sauson adds, “To bring Maharashtrian essence to this song, the music video has been given the scenes of agmaan that captures his powerful agmaan energy and expresses the emotions of the song” produced by Suresh Bhanushali and Photofit Music Company.

Mentioning the past projects under the label of Photofit Music, they have released several festive songs like “Ganpati Bappa Morya”  directed by Mr. Amit K Shiva on Ganesh Chaturthi 2021 featuring Hindustani bhau, “Gori tame” capturing the essence of Navratri and “Chand” on the occasion of Karva Chauth picturing the upline chemistry of Sambhavna Seth and Avinash Diwedi, produced by Mr. Suresh Bhanushali.

The high energy of the song “Aali Bappa Ki Sawari” praises lord Ganesha and the lyrics, which are given by Dhruvin Mewada portray how Bappa removes obstacles from the way of devotees. Spread the love, wishing you and your loved ones a very Happy Ganesh Chaturthi.